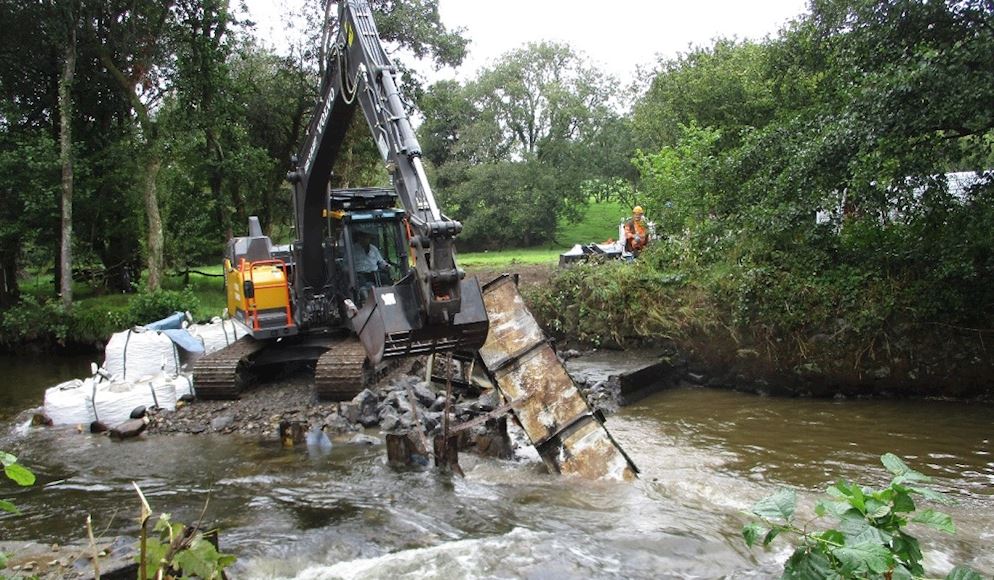 A joint project between Natural Resources Wales (NRW) and the West Wales Rivers Trust (WWRT) to open the upper reaches of the Eastern Cleddau to migratory fish has been completed.

The removal of the weir at Vicar’s Mill is the culmination of more than six years of planning by NRW and WWRT and will play a key role in improving the health of the River Cleddau and its fish population.

“There has been a weir at Vicar’s Mill since the 1800’s when water power was used for milling. In more recent times the weir height was increased to provide water for a fish farm and a fish pass was built at the same time to allow fish to negotiate the weir.

“Additionally, salmon and sea trout populations in the river are under real pressure at the moment and this scheme will help improve their numbers, which will bring economic benefits for local fisheries.”

Man-made structures in rivers also interrupt gravel movement and fragment whole river catchments, reducing the quality of habitat available. Upper parts of river catchments tend to be cooler and protected, to a certain extent, from the worst effects of climate change so their removal effectively future proofs the river and its ecology.

Work to dismantle the weir and fish pass began on 1 September and was carried out by an experienced local contractor who completed the task in just 2 days.

The project was managed by WWRT who applied for all the necessary consents to enable the project to proceed, appointed the contractor and managed the delivery to ensure that all the required environmental protections were in-place given the sensitive nature of the river.

The work was completed without incident and it is now hoped that all migratory fish species will be able to access the whole Eastern Cleddau catchment to spawn and complete their various life cycles.

“Today we are celebrating the fact that migratory fish will now be able to access the upper reaches of the Eastern Cleddau.

“The removal of Vicars Mill weir is the culmination of more than six years of collaboration between NRW and WWRT, during which the scheme was modelled and carefully designed to consider the special environmental features of the site. We are grateful to Welsh Government and NRW for providing the funds to facilitate the delivery of this significant project.

“The completion of this project is a key element in the efforts to improve the health of the Eastern Cleddau for all species and the Trust is very much looking forward to continuing working in partnership with NRW, to ascertain how successful the removal of the structure has been at assisting with improvements to fish populations.”

NRW will continue to work with partners to explore more river restoration opportunities like this, or working with natural processes through the South West Wales Area Statement work. There will be particular focus on opportunities within the Milford Haven and Swansea Bay areas.

They are two of 10 opportunity catchment areas NRW has identified for focussed work on sustainable management of the water environment.