UWTSD re launches their #Whereisyourmate campaign

The University of Wales Trinity Saint David is proud to relaunch their #WhereisyourMate campaign, which aims to reduce the numbers of young people finding themselves in a vulnerable position on a night out in Swansea. 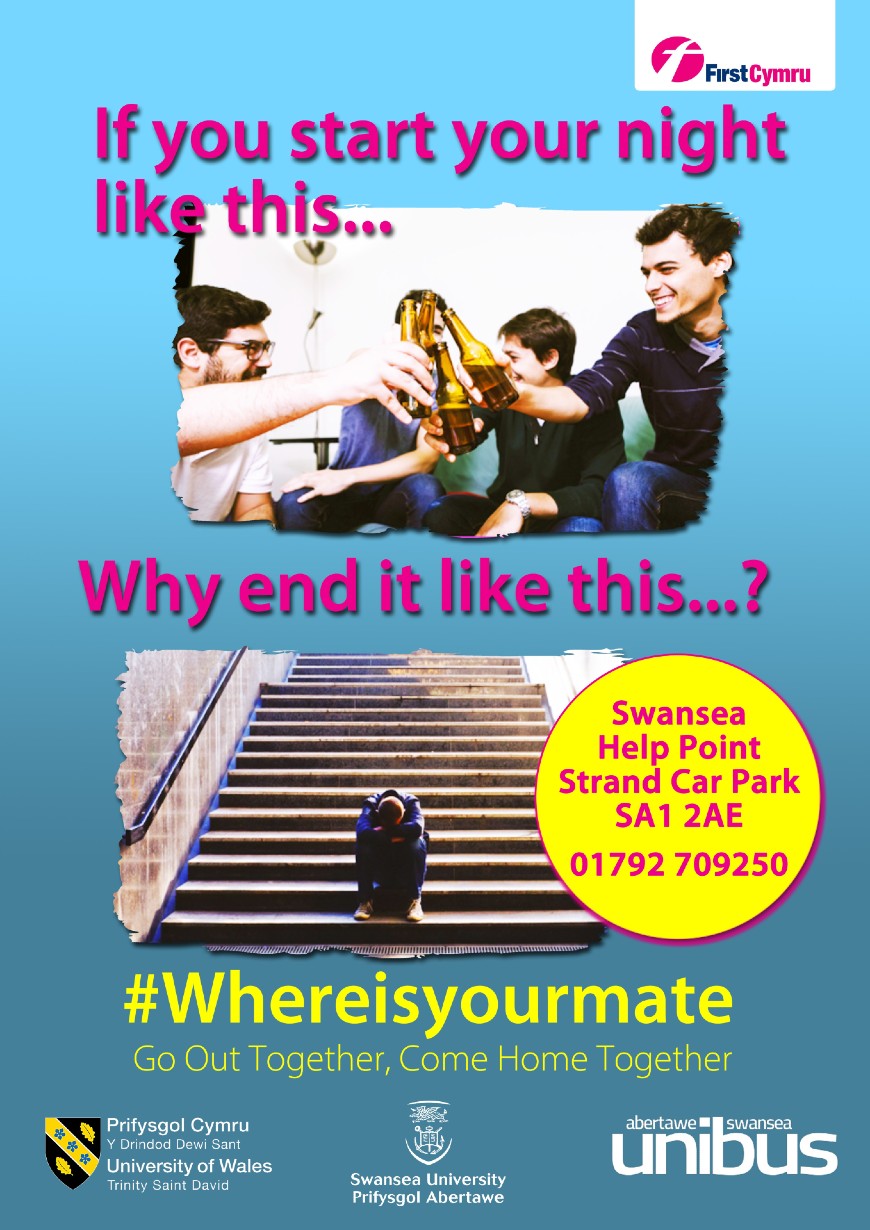 UWTSD Academic Director Bronwen Williams set up the campaign to encourage students to look out for each other when out and about in the city. The aim of the campaign is to raise awareness and to encourage the students and young people of Swansea to have a buddy system so that they go home with the people that they came out with, and also encourage them to have a specific meeting point if somebody goes missing and to keep a friend’s contact number on paper just in case their mobile phone runs out of charge.

The campaign is also supported by Swansea University and transport company First Cymru.

Bronwen Williams said: “We want people to feel confident and safe in the night-time economy of Swansea, and all agencies involved in the delivery of this are working hard to make sure that anyone coming into the city at night is safe and can enjoy everything that the city has to offer.”

Bronwen added: “ one of the reasons that the university set up this campaign was because it had been noticed that from 10 pm until 4 am a number of young people who are intoxicated find themselves on their own, as they get separated from friends and as a result are often vulnerable. Therefore it is also important to raise the profile of the Swansea Help Point.”

The Swansea Help Point was set up by the Police and Crime Commissioner in 2014 with Home Office Innovation funding as an initiative to reduce the strain on emergency services in the night-time economy. The Help Point runs on Wednesday and Saturday evenings at Wind Street, Swansea between 10 pm and 4 am, looking after injured, intoxicated and vulnerable people. So far it has helped over 5,000 people. The Help Point is a multi-agency initiative with South Wales Police, St John’s Ambulance, UWTSD, Welsh Ambulance Trust and ABMU Health Board working together and based in the Strand behind Wind Street. When the Help Point is open, a Nurse, Paramedic, Rapid Responder, a Police Officer, St Johns first aiders and student police volunteers, from the universities in Swansea, all operate the scheme.

Quite often, the individuals attending the Help point are students that aren’t local, therefore calling a family member to come and collect them is impossible. The Help Point won’t release the individuals until they are able to look after themselves, or if a friend can collect them.

“This campaign is about getting young people to look out for each other while out and to make sure that no one goes home alone. The messages are clear, a night out in Swansea is safe, there are people there to help you, and if you are with your mates remember ‘if you go out together, come home together’. Think #Whereisyourmate.”