The sun and crowds came out for Royal visit Both the sun and the crowds were out as Prince Charles returned to Swansea 50 years to the day that he announced it was to become a city.

The Prince and the Duchess of Cornwall were given a warm welcome as they met some of the volunteers, community groups, emergency services and business people who have contributed to the city since that historic occasion.

Hundreds of well-wishers and school pupils were at Victoria Park and cheered the royal couple as they made their way to the Patti Pavilion.

The visit forms part of a packed programme of activities taking place throughout 2019 as part of the 50th Anniversary celebrations.

Swansea Council’s Deputy Leader Clive Lloyd said: “It was a privilege to welcome The Duke and Duchess of Cornwall to Swansea on such an historic day.

“Prince Charles spoke warmly about Swansea and his recollections of his visit 50 years ago.

“We were delighted that so many community organisations who are the lifeblood of Swansea accepted our invitation to attend at the Patti Pavilion and our royal guests were clearly interested in the work that they do.”

Prince Charles and Camilla signed a replica of the City Charter, cut a birthday cake celebrating the 50th anniversary and unveiled plaques commemorating the visit to Swansea and the Patti Pavilion.

They also spoke with a small group of people who were present when he visited Swansea 50 years ago.

Raeesa Miah from St Helen’s Primary School, who won the main prize at this year’s Show Racism The Red Card competition in Wales, presented the Duchess of Cornwall with a posy of flowers. Among those at Victoria Park were pupils of Bishopston, Terrace Road and Christchurch primary schools.

They waved flags and banners as the Royal couple arrived and strolled down the park’s tree-lined avenue.

Jayne Allchurch, a teacher at Bishopston, said: “It was lovely to celebrate an important part of Swansea’s history in this way.

“Being able to see the Prince and Duchess really brought the Royal family alive for the children.”

Owen Weston, a teacher at Christchurch, said: “We’ve spent a couple of weeks learning about the 50th anniversary of Swansea becoming city.

“Our school has children from around the world so it’s important they’ve now got a greater understanding about the place they live and its history.

“The pupils were really excited to come here today.

“A lot of them say they’ll never wash their hands again – because they shook Prince Charles’ hand.”

On his arrival at Victoria Park Prince Charles stopped off at the kiosk that provides employment opportunities for people with disabilities and learning needs.

Bethan Powell who works at the kiosk said: “Meeting Prince Charles and Camilla was amazing and I can’t wait to tell my family because they were both so nice. 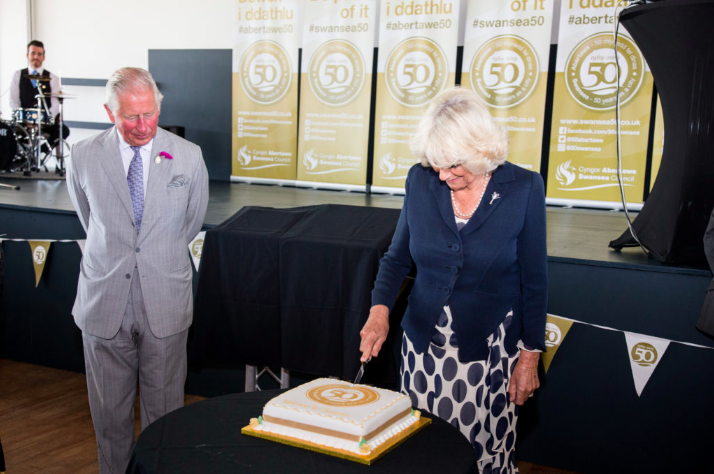 “He asked us about what we were serving today so I told him about the quiche which he said he likes.”

Prince Charles also met with Hanif Miah who set up his restaurant at the Patti Pavilion with business partner Foyaz Miah after training delivered by The Prince’s Trust Cymru which he said helped transform his life.

Mr Miah added: “We talked to him about what we are doing as a business and he was just so engaging it was like talking to one of our friends.

“It was surreal to meet him on such an important day for Swansea.”