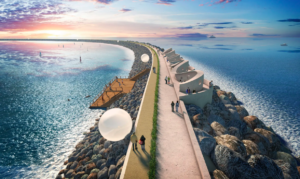 The backers of a pioneering project to harness energy from the tides off the Welsh coast have rebooted the scheme and believe they can build it without the help of government.

With the recent failure of two major nuclear projects, attention has turned to alternatives to fill the low-carbon power gap, with developers of windfarms and small nuclear plants among those vying for government support.

Now the firm behind the proposed Swansea tidal lagoon, for which ministers rejected subsidies last year on the grounds it was too costly, has said it believes the project can work without government money and be built within six years.

Swansea-based Tidal Power plc said several major companies were interested in buying the low-carbon electricity generated by the tide flowing through turbines in a concrete wall along Swansea Bay.

Property company Land Securities, Cardiff Airport and developer Berkeley Group are among those to have expressed an interest in signing a power purchase agreement (PPA) with the lagoon.

Such PPA deals are typically used by big energy users as a way of hedging against future power price rises, or burnishing green credentials by buying from renewable sources. A record 13.4 gigawatts of clean energy contracts were signed last year, according to BloombergNEF.

The lagoon’s backers also believe its prospects will be boosted by adding floating solar panels to the lagoon, ramping up the amount of electricity it generates. UK water companies have already used floating solar power on reservoirs in Manchester, near Heathrow and elsewhere.

The addition of solar should increase the Swansea lagoon’s annual energy output by more than a third, up from 572 gigawatt hours, enough to power about 150,000 homes, to about 770GWh.

Chris Nutt, the business development manager at Tidal Power, said: “It is becoming widely understood that there is a huge hole left in our long-term energy demands and after the latest cancellation of expected new nuclear capacity our choices if anything have become simpler – saturate the UK coastline with offshore wind or invest in groundbreaking solutions like Swansea Bay.”

The company is sounding out big energy users, including leading brands in the professional services, telecoms, media, manufacturing, services and utilities sectors.

Mark Bailey, the director of planning and development at Cardiff Airport, said: “The tidal lagoon project … could be a game changer for the Welsh economy.”

The plan is to secure enough signed PPAs by the end of the year to enable a final investment decision in early 2020, with construction starting shortly afterwards. If that timetable were met, the project would be generating power in 2024 or 2025.

Going ahead without subsidies would be a rarity for a new power station in the UK, almost all of which rely on some form of government contract or subsidy before being greenlit.

Advocates of the project have said the predictability of the tides could be useful as nuclear falters and variable sources such as solar and wind power grow. But government has been sceptical.

The business secretary, Greg Clark, told parliament recently: “No one is more enthusiastic than I about innovation and new technologies, but the truth is that the costs of the proposed [Swansea] project were three times that of Hinkley Point C, and a full programme [of several lagoons] would make a tiny contribution to our energy supply for a much greater cost.”