Swansea observatory due to open this summer 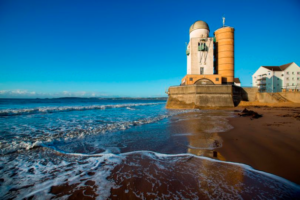 The revamped Swansea observatory should be reopening this summer as a bar and restaurant.

The landmark Marina Towers building, which was built in 1988, used to be leased by Swansea Council to Swansea Astronomical Society, but closed in 2009 when the society moved to Fairwood.

The property was bought from the authority five years ago by businessman Noah Redfern, the man behind Noah’s Yard in Uplands and Flickering Light in Wind Street, who revealed plans to develop the property into a ground floor cafe restaurant, with a cocktail bar above.

He says he is hopeful the business will be able to throw opens its doors by the summer.

He said: “With the purchase of the building and all the money put into it, it’s not far off £1million.”

Mr Redfern’s plans for the building include outdoor seating and a top floor holiday let.

He says there are few better locations for the new venture.

He said: “It’s a brilliant location. There are only a couple of venues that are right on the sea front, such as Mumbles Pier.

“And we hope we’ll really be able to capitalise on it. We now hope to finally open by early summer.”