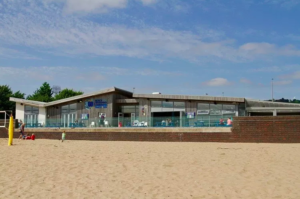 A planning application just received by Swansea Council sees a proposal to build on the Mumbles side and to the rear.

The plans are from Hole Britton Ltd, a partnership of former Swans star Leon Britton and Swansea brother and sister Ryan and Lucy Hole.

They want the building to offer a main restaurant with bar and a café lounge bar with an area for dogs, a new entrance foyer and expanded outdoor seating area.

A sports academy, featuring a range of water and beach sports, will be based in the site’s former equipment store.

The partners plan to call the venue Seven in honour of the footballer’s former shirt number. It will replace the former 360 café.

The application, which will be considered by city planners, follows the council’s search for a new operator for the former 360 venue that was vacated in September.

Subject to final contract arrangements, Seven will take control of the former 360 site early this year. The council will continue to own the site and Seven will be its tenants under a 25-year lease.