So, what actually is the Foundational Economy?

Sometime in 2018, the Welsh Government started talking about something called “the Foundational Economy“, and then in February 2019 they launched something called “the Foundational Economy Challenge Fund”… This week, the first of the projects to have been successfully awarded money from this fund have been announced, so we thought you might be wondering, what exactly is the foundational economy?! 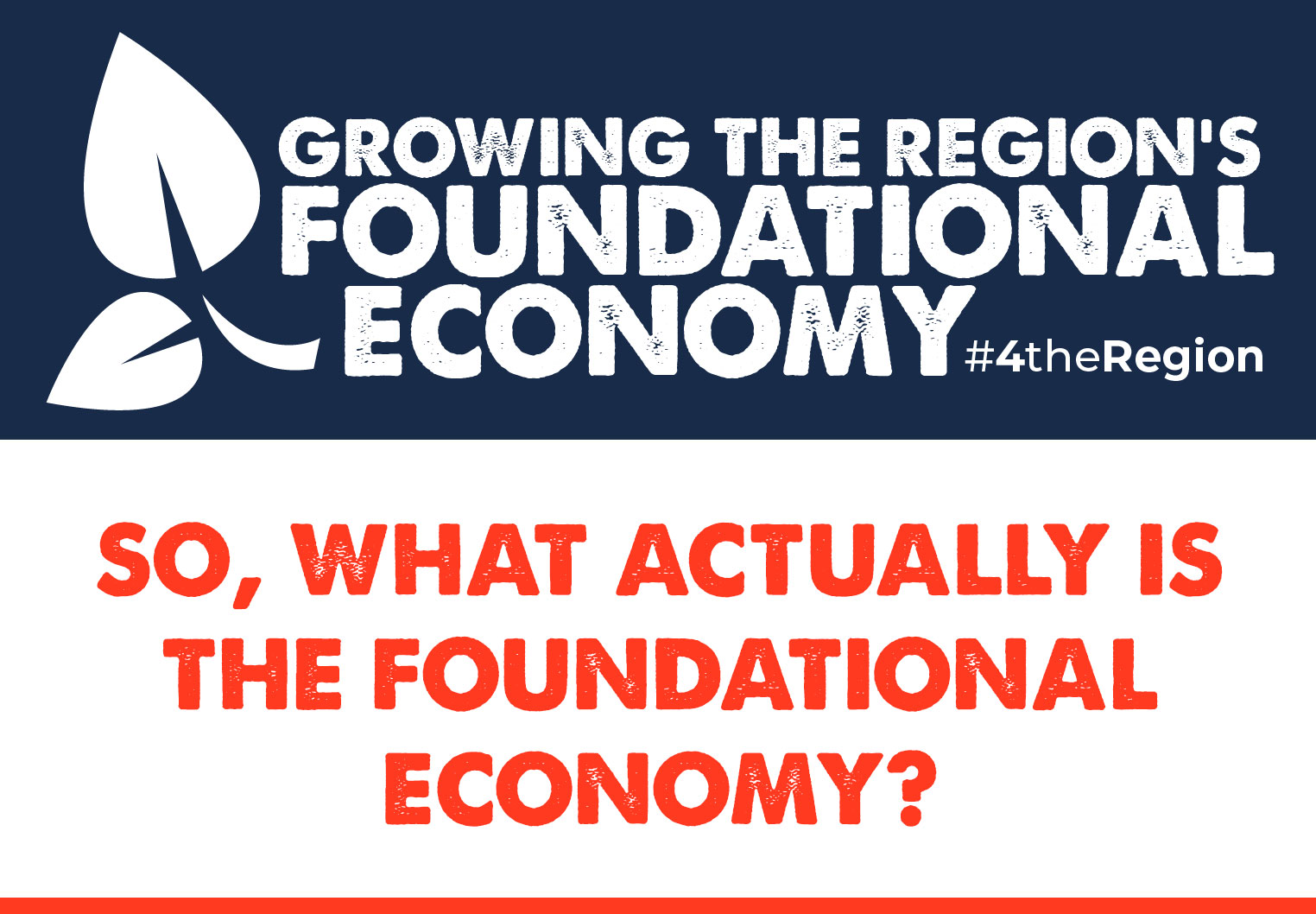 The Foundational Economy refers to the parts of the (Welsh) economy that are here, in Wales, because PEOPLE are here.  It’s the parts of the economy that aren’t based on the comings and goings of global capital, but rather, the fundamental things that we need, buy, use and rely on in the ordinary course of living our daily lives here in Wales.  Things like housing, basic services, food, energy, travel, healthcare, and all the other things we use, day-to-day.  I guess things like clothing, haircuts, weddings, football clubs, banking, furniture, toiletries, car servicing, local builders, childcare, social care, someone to fix our boiler when it breaks down… all these things are foundational to our lives, they are the parts of the economy that can’t be relocated out of Wales, and therefore, at least in theory, they are the most resilient parts of our economy.

Resilience is important, in a fast changing world.  Whether we’re talking about the massive economic and societal shocks that the climate crisis will bring; or the flight of international business and the uncertainty brought on by Brexit; or the rapid rise of technology and automation…  There are many things we can’t control, which are set to have massive impacts on our region and on Wales as a whole, over the coming years.

So that’s why the shift in focus from obsessing about inward investment and global exporting, to investing instead (or, as well) in the strength of our Foundational Economy, is so timely and so vital.  At 4theRegion we really welcome this new emphasis on the homegrown economy – the parts of the economy that are most real to most people in this region, and the parts of the economy that we have the power to develop, build, control, maintain – even in a fast changing world. 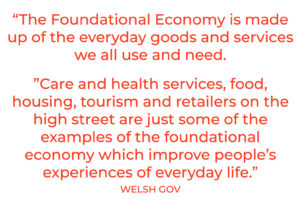 Because the trouble is, the foundational economy has been hollowed out over recent decades.  How many of our “foundational” needs are in fact being met from “within the region”, or within Wales?  With the rise of massive supermarkets (and their takeover of even our “local” shops), and the dominance of global megacorporations like Amazon, and the trend towards online shopping, and the preference for chain stores and brand names… how many of our daily needs are actually being met by local businesses and organisations?  How many of our jobs are provided and sustained locally?  And how much of our “day to day”, ordinary spending is actually being retained in our “foundational economy”?  When we spend our money with external companies, that money is lost from our local and regional economy, save perhaps for a few local jobs (increasingly vulnerable to automation).

A hollowed out foundational economy doesn’t offer any regional resilience.  And doesn’t provide many jobs.  And that’s why it’s so important to reinvest and rebuild our foundational economy: so that it can provide local, sustainable jobs for local people, and so that we have access to the fundamental services and supplies we need, here in this region, whatever might happen in the wider economy.

Presumably, ministers in the Welsh Government are thinking the same thing.  And so in February 2019, a new funding programme was launched, which is quite different to anything we’ve been aware of before:

Announced by Economy Minister Ken Skates, “The Foundational Economy Challenge Fund aims to test new ways of nurturing and growing the everyday parts of Wales’ economy, and is part of the Welsh Government’s work to reach out to those communities across Wales who are feeling disengaged and left behind…. The fund offers applicants up to £100,000 to reverse the deterioration of employment conditions, stop the leakage of money from Wales’ communities and reduce the environmental cost of extended supply chains. It will also work to ensure that lessons learnt are shared across Wales.”

We’ve talked about what the Foundational Economy is, but what, then, is a “Challenge Fund”?  Maybe we’re a bit geeky, but I have to admit to be being really quite excited about the concept of a Challenge Fund, and I’d love to tell you what I understand it to be.

Whereas most government funding seems to me to be always focused on, well, funding government, or maybe funding universities, and “research”, or councils or infrastructure or big centralised projects… what we absolutely love about this Challenge Fund is that it presented an open invitation to virtually anyone with a good idea, to bid for money – up to £100k – to try something new, something related to rebuilding and developing the Foundational Economy.  It was a relatively simple application process, and you didn’t have to be a university department, with match funding, FOR ONCE!

At 4theRegion, we’re passionate proponents of the idea that the answers to our region’s problems are to be found right here in the region, and that the wisdom we’re seeking is among us – if we would only care to look.  We’re fed up with the idea that only academic professors ever have good ideas, or only local councils know what communities need, or only major companies can create wealth, or only external consultants have the right answers…  So we absolutely love the “challenge fund” ethos, which throws the challenge out there, “to the people”, and invites anyone with a good idea, to make an application.  Talk about crowdsourcing wisdom… we love it!

As a result, our understanding is that the fund was massively oversubscribed!  For a few weeks over the summer, everyone and their dog seemed to be going for it!  But isn’t that brilliant?  Think how many brilliant, new, grassroots, practical ideas must have been contained within those hundreds of applications from across Wales!  Think what wisdom must have been surfaced, simply by putting up a bit of money and asking the question, “How do you think we could develop our foundational economy?  What would you like to try?”  Of course, there will undoubtedly have been a load of silly ideas too, and it must have been quite a job to work through all the applications, but I reckon it must have been a really exciting job, with some tough decisions.

Clearly, there were more good ideas than anyone expected, because ministers announced this week that the fund (which had already been doubled from an initial £1.5m to £3m back in May) has now been further increased by an additional £million.  So that’s almost £4m to be shared out in tranches of up to £100,000 – which means over 40 projects will be supported.  It remains to be seen how risk averse the funders will have been, and we’ll certainly be interested to see how much of the £4m will be channeled through universities and local authorities… 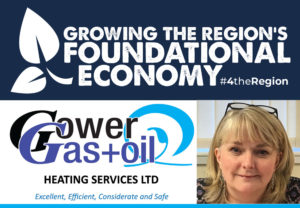 But the early signs are good, with the first three projects announced this week demonstrating a good mix of size and type of organisation, and some really exciting ideas to be trialed and implemented – in our region!

Watch this space, we’re awaiting more announcements with baited breath – not least because we at 4theRegion are part of a couple of bids, one of which is all about regional procurement and supply chain development!  So, keep your fingers crossed for us, and for all the other brilliant applicants from across South West Wales!  Exciting times, a worthy mission, and high hopes of new solutions to the challenges facing our Welsh and regional economy!