Cwmgors kicked off the first game of the season by unveiling their new solar panels on the club house. The club are hoping the solar panels can provide an energy boost to the season. The 30kW system cost £27,928 and was installed free of charge by Egni Co-op with funds from its Share Offer which has raised £4.49m to date. 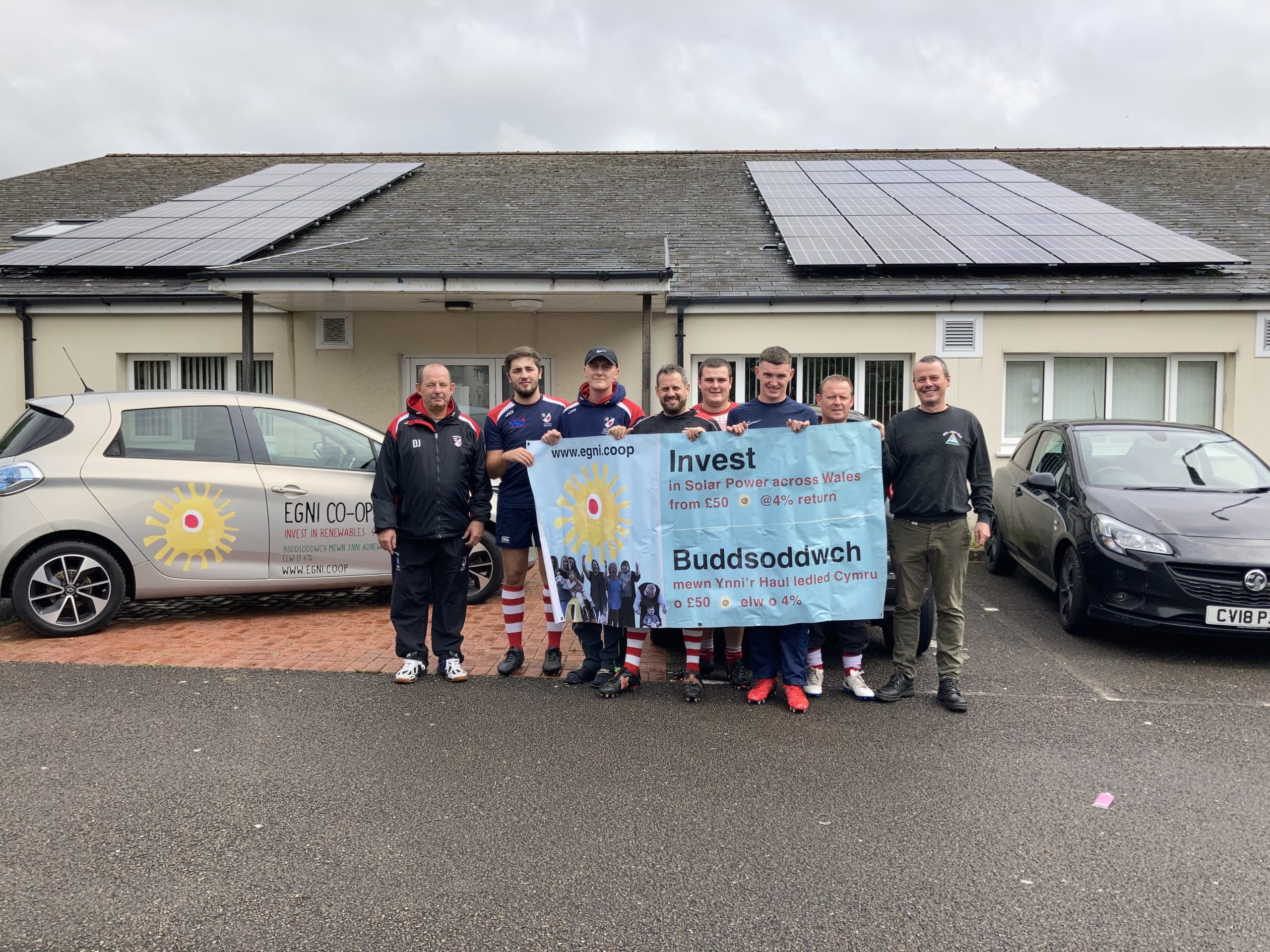 Dorian Jones from the Club said “We’re delighted to be one of the first rugby clubs in Wales to install solar and play our part in tackling climate change. We’ve all seen the news of wildfires in different part of Europe. Our club works with a lot of young people and we want to play our part on building a future fit for them.”

There are panels on the front and rear of the building which faces east – west. This means the roof gets the sun in the morning on the rear and on the front in the afternoon. The panels will reduce the club’s electrical consumption from the grid and their carbon emissions by 7,700 kg/year . It’s estimated the club will save £2,400 /year which helps the financial stability of the club as all sports venues are recovering from Covid.

Feasibility and development costs for the project were funded by the Rural Development Programme, the Welsh Government Energy Service and Sustainable Communities Wales.

Dan McCallum, co-director of Egni Co-op said “Cwmgors is the birthplace of the greatest rugby player of all time, Gareth Edwards, and it’s great that his home club is leading the way in reducing our carbon emissions.

Egni Co-op has now raised £4.49m from Community Shares and is fast approaching its target of £4.6m. We want as many people to join us. Anyone can invest from £50 to play their part in tacking climate change. Please visit www.egni.coop for more info. We’re delighted that we’ve recently been able to pay our Members the 4% annual interest on their investment as per our Share Offer Document. Those Members include 44 schools where we’ve got solar panels. Egni Co-op is now the largest rooftop solar co-op in the UK which is a fantastic achievement for Wales. Other sports venues such as Merthyr Town Football Club have also installed solar with Egni and you can see a short film about it by double Bafta Cymru winner, Mike Harrison below.”

Egni has installed 4.3 MWp of rooftop solar on 88 schools, community buildings and businesses across Wales. It’s now the largest rooftop solar co-op in the UK. www.egni.coop

All the sites are backed by the Feed in Tariff. Egni is refinancing our loan from the Development Bank of Wales with co-op shares as this is at 6% interest whereas co-op members invest at 4% interest. This means that there is more surplus going into climate change education projects in Welsh schools.

Here are recent films made by double BAFTA Cymru winner, Mike Harrison about the largest rooftop solar project in Wales on the Geraint Thomas National Velodrome in Newport and at Merthyr Town Football Club.

The term given to the ‘partnership’ is ‘Local Action Group’ and it is made up of members from the public, private and voluntary sectors. In Neath Port Talbot the LAG – Regenerate NPT, is responsible for overseeing our local LEADER programme. The LAG is made up of representatives from a wide range of organisations throughout the areas of NPT and Wales. The LAG is there to target the priority areas for NPT and to support the development of grass root projects that directly address these priority areas.

SCW works with community organisations across the country to improve the energy efficiency of their buildings. They reduce their emissions and act as an example of sustainability for the whole community. Funded by the Welsh Government’s Rural Development Programme, SCW is delivered by a consortium of Welsh energy efficiency experts, led by Severn Wye Energy Agency. For more information, visit sustainablecommunities.wales