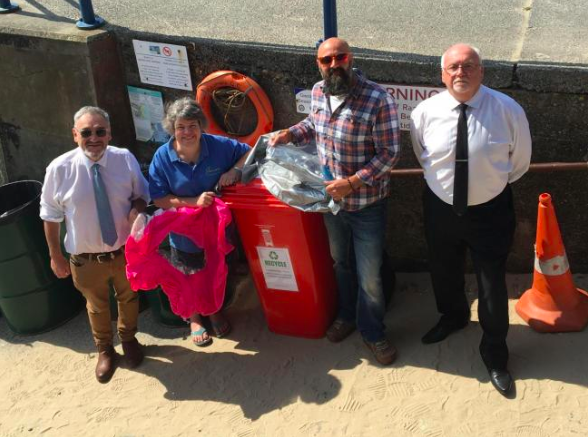 An eco-conscious shop in Saundersfoot has been named as a collection point for a wide range of unusual recyclable items as part of an Inflatable Amnesty.

Sam Turner of Elements noticed a lot of rubbish being left on local beaches, especially during the summer months, and wanted to find a way of recycling items which have historically ended up in landfill.

Their research led them to Wyatt and Jack, an Isle of Wight based company which makes unique bags from salvaged inflatables and beach toys.

The company welcomes collections from all over the world, receiving items such as paddling pools, rubber-rings and dinghies, lilos, beach balls and even bouncy castles.

Locals and holiday-makers are invited to bring broken or unwanted items to the Elements shop where they will be packaged and sent off to Wyatt and Jack for reuse.

Cllr Tomos, Pembrokeshire’s Cabinet Member for the Environment, said thanks were due to individuals like Sam who “take it upon themselves to provide a solution like this.”

“It’s a wonderful idea and a fantastic response to a growing problem on Pembrokeshire’s beaches,” he said.

Since the launch, a Facebook post on The Pembrokeshire Eco Champion Project Facebook page has been viewed more than 30,000 times resulting in a number of other local businesses across the county stepping forward to join the Inflatable Amnesty.

“What began in Saundersfoot is now being rolled out in St Davids and Fishguard with other local businesses signing up to become collection points. The timing is perfect as Pembrokeshire’s beaches are full of holiday makers enjoying the summer sun,” said eco champion co-ordinator Mark Bond.

Sam Turner from Elements wished to thank the Roach family who own Saundersfoot Beach for their continued support with this initiative.