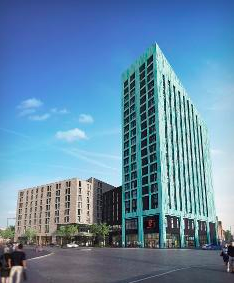 Plans for a 780-bedroom student tower near Swansea’s city centre railway station have been given the go-ahead.
They were given planning permission by a Swansea Council planning committee today (October 2).
The building – described as having a "slender tower of bold design" – will rise up to 17 storeys from the existing Mariner Street Car Park and neighbouring land. Its ground floor will have commercial units.
Swansea Council leader Rob Stewart said: "This is another signal that Swansea is on the up.
"This tower will be a bold addition to the city skyline and symbolises the successful regeneration of High Street.
"The 780 student rooms and high quality commercial space will generate significant levels of footfall and add a substantial boost to improving High Street for residents, businesses and visitors."
"This is part of our strategy to ensure that all areas of the city centre benefit from the regeneration that is under way.
"We need to have more people working in, living in, shopping in and enjoying the city centre – and this will help with that aim."
Planning officers said the tower will make efficient use of an under-used plot of land.
The planning application was submitted by Fusion Students. It features commercial units, a courtyard and an angled top.
Planning officers reported that the building will generate negligible amounts of road traffic. It complies with the council’s tall building strategy and with the Swansea Central Area Regeneration Framework which aims to develop city living, achieve a high-quality environment and express a distinctive identity.
Fusion Students are behind the scheme in conjunction with RDE Silex and Varsity Halls Swansea.
Andrew Robinson, of RDE Silex, said: "We are delighted to be working with Fusion, a market-leading developer of high-quality student accommodation across the UK."
Julie Williamson, a local business owner and officer with the Federation of Small Businesses (FSB) welcomed the development.
She said: "This development will have a positive effect on High Street and neighbouring areas – I welcome it."
During construction, which is due to start next year, the Mariner Street car park will be permanently closed. Motorists will instead be able to use the nearby High Street multi-story car park. The Network Rail train station car park will be relocated to the top deck of High Street car park which is due to be upgraded after council discussions with Network Rail.
Swansea Council