Rebuilding Swansea: The transformation of our cities, how they will look in a post-pandemic future and who they will serve

The pandemic is going to fundamentally change how our cities look, who lives in them and even what purpose they serve. Many of the big names on our high streets, such as Debenhams and Topshop, will not return. Our cities will soon become residential hubs where the focus will move to socialising and entertainment and away from working and shopping. 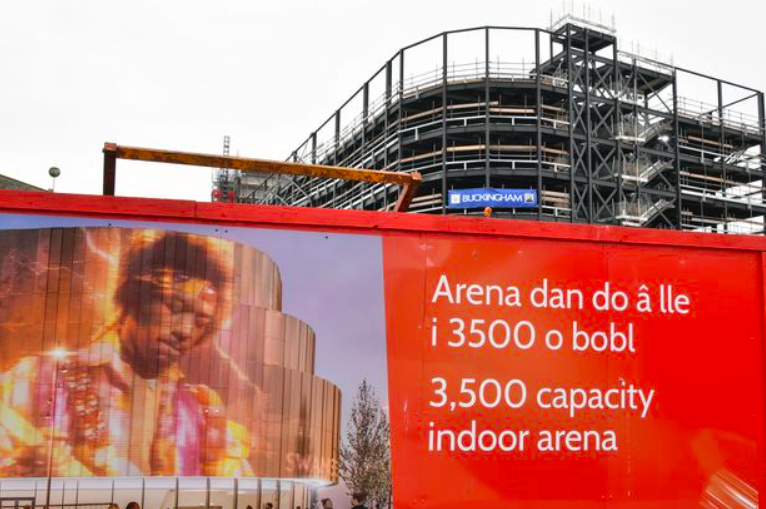 The 3,500 capacity arena is set to open later this year (Image: WalesOnline/Gayle Marsh)

Swansea city centre is proof that this evolution is already underway. The new 3,500 capacity indoor arena is scheduled for completion this year as part of the £135 million Copr Bay Phase One development, which will see new restaurants, city centre apartments, an acre of parkland, and a pedestrian bridge linking the city and the beach. In addition, Castle Square will receive a major facelift with more green spaces and places to eat and drink, and £3 million will be spent transforming Wind Street into a “family-friendly” destination.

WalesOnline recently spoke to architects, city planners and retail experts about the changes we will see.

Wez Morgan, principal director for architectural practice Starki Limited, says “City centres will have gone through a commercially stressful period under ongoing restrictions. We’ll most certainly return initially to a centre with more vacant units with those that are open trading at a lower capacity than in 2019. With building projects introducing residential living to the centre in Swansea, we may see a change to the dynamic of our city.”

He says city centres will shrink as a result of the pandemic in terms of trading, frequency and active businesses, but that “In physical terms I’d suggest businesses that trade from the centre will remain, whereas office space may remain vacant or find an alternative use as some of the population finds benefits in working from home. In terms of city living, I think this will grow the city as new student and residential property become occupied.”

In order to attract shoppers back, he believes “Confidence needs to be fostered from the government for those who are cautious or uncertain. While some have suggested dates to lift all rules, like in England, people are asking if this is too early, considering the target set for offering all UK adults [the Covid vaccine] is over a month later. Business owners will be doing their very best to keep their customers and clients safe, following advice from those who are responsible for lifting the restrictions. Clear communication is key to this working.”

He thinks the types of buildings in city centres will change, and “Smaller units may be more attractive to independent businesses hoping to gain their first taste of street presence, but these need to come with the right terms and at the right cost – we want businesses that will make a mark in our cities and grow organically. Some buildings lend themselves better to larger outfits, but this doesn’t mean that they can’t accommodate smaller concessions.

“There will be some who have adapted well to working from home and will likely insist on continuing following the easing of restrictions. While possible, there’ll always be a need to have a working space for things like training and meetings, so with the right eye, existing spaces can be adapted or remodelled to accommodate an agile way of working. Organisations will make their own decisions about how much space they need and if it’s possible and attractive for some staff to continue to work from home, the space required at an office may either go to better use or become redundant.”

He believes, generally speaking, construction in Swansea seems to have been largely unaffected by the pandemic, but that “We can learn from how well the city’s been able to cope with restrictions and how future architectural practice may influence the severity of the rules everyone’s been expected to follow. Our non-residential clients have asked us to consider the potential of a future pandemic when arranging the layout of refurbishment works, and it’s a given to design new projects with consideration to a possible need for social distancing measures.” 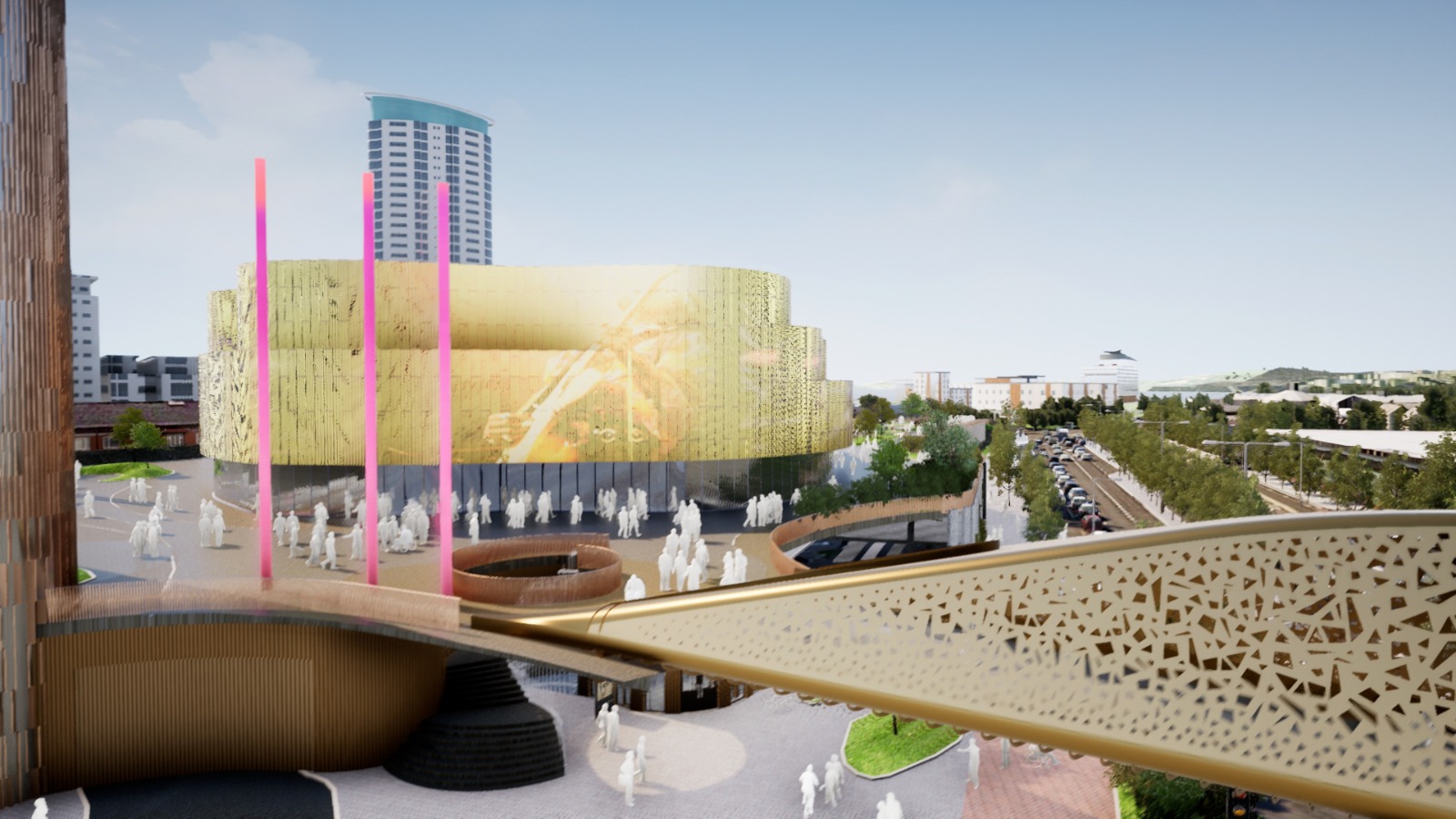 Laura James, a manager of retail growth at University of Wales Trinity Saint David, says “We will definitely see a shift in consumer behaviour and how they shop and how they want to shop. The high street will do well by recognising that and being able to offer a multi-faceted experience.

“Town centres will look different but they will be more community based where retail will thread through Welsh communities.

“I think there will be a new dawn of retail where a new hybrid town centre is going to start emerging. There will be hybrid cafes, retail stores that are offering a mix of online, click and collect and physical contact as well.

“I think we will still see big names on the high street. Primark, for example, doesn’t have an online offering so going in there is a shopping experience. I think we need to have those alongside the independent retailers to build that hybrid town centre.

“If our town centres are going to be made into social hubs then they could even draw in more people than before the pandemic.

“Making them more accessible where you can work and socialise will be attracting a different type of clientele by diversifying who the customer base is.” 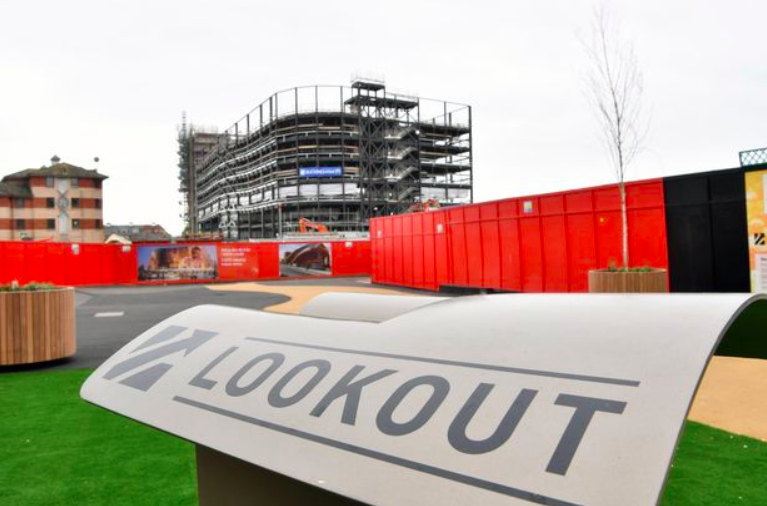 Work on the city’s new Copr Bay development has been taking place while many of us have been at home (Image: WalesOnline/Gayle Marsh)

Dan Wagner, chairman and CEO of retail technology specialist Rezolve, believes “We are a time sensitive economy now where nobody has time or wanders around aimlessly looking for stuff. People just want immediacy.

“Retail and food and drink need to think about tapping into that impulse. Coffee shops and cafes have the potential to drive traffic to them.

“I think city centres are going to need to encourage people to congregate in leisure scenarios.

“We will still go to shops but there also needs to be a strong cause for return engagement.” 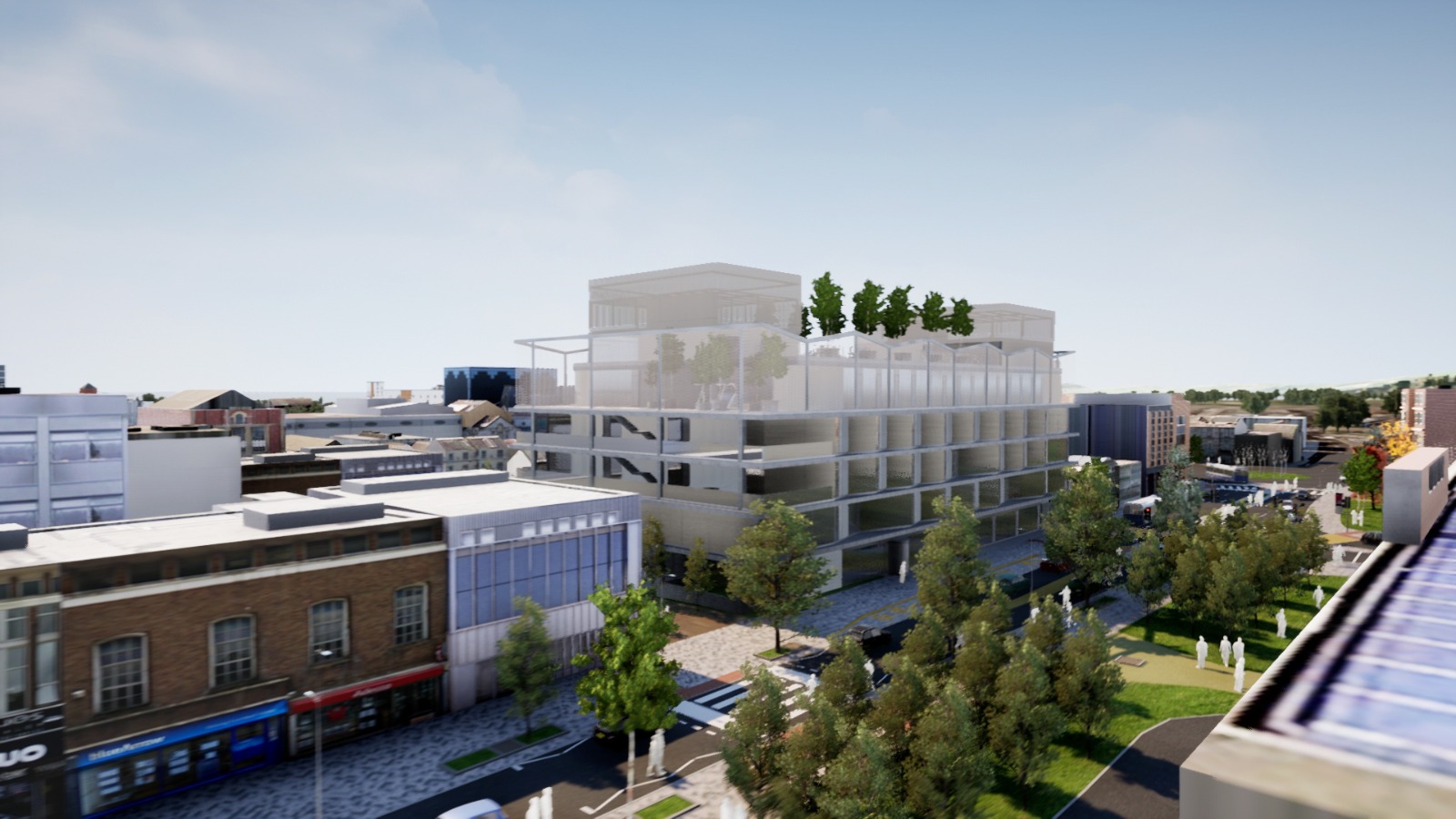 Dr Richard Smith, an expert on global cities at Swansea University, says “The closure of several big brand shops in Swansea city centre was already almost inevitable due to the decentralisation of retail – with shopping moving to Swansea’s edge of town retail parks – and the increasing sophistication and growth of online retailing which has only became more popular because of the pandemic.

“The trend is toward Swansea city centre as a destination for many things – especially leisure and entertainment – rather than just shopping.

“Employees in sectors which can function with some home working from staff will demand more of it – perhaps one or two days a week – resulting in less commuting and fewer people in the city centre on a daily basis than would otherwise be the case.

“There will be an increased trend towards shared offices and flexible work spaces for collaborative working in the city centre as firms seek to avoid the costs of traditional single-use permanent offices.

“The pandemic has encouraged people to value homes with gardens in neighbourhoods with low population densities.

“There is likely to be increased suburbanisation, counter-urbanisation, and seafront living in Swansea as the city centre and living in apartments becomes desirable for fewer people than it might of before the pandemic.” 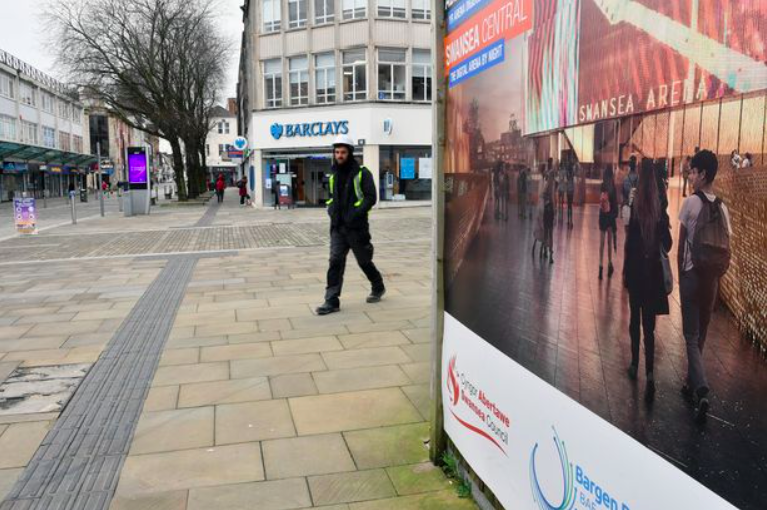 There may be more demand for city centre living in the near future (Image: WalesOnline/Gayle Marsh)

However, Huw Griffiths, director of Swansea based Huw Griffiths Architects, doesn’t expect people to move away from city centres.

He says “The buildings in our city centres are already changing from being completely commercial into a combination of commercial and residential.

“All city centres now have more flats and residential properties than ever before. This is an attempt to increase the footfall of people living and working in the city centres because after hours they are sparsely populated.

“There are requirements for us to get people to live back in town centres which suits single people, elderly people and you don’t necessarily need a car as most of our city centres are well serviced with buses and train routes.”

“I think people would like to see greener town centres and more soft landscaping in our city centre streets.

“There’s been a big reduction in traffic and I think it will continue to reduce.

Swansea Council leader Rob Stewart says the local authority “Recognised long before the pandemic began that the nature of city centres is changing and we had to improve the leisure offer in Swansea as well as making it a more attractive place to live, work, visit and do business.

“It will be a catalyst for the major transformation of other key city centre sites.

“We are planting hundreds of new trees, we are creating many more green spaces and we will continue to develop cycle paths and invest in public transport to make it easier to visit without the car.” 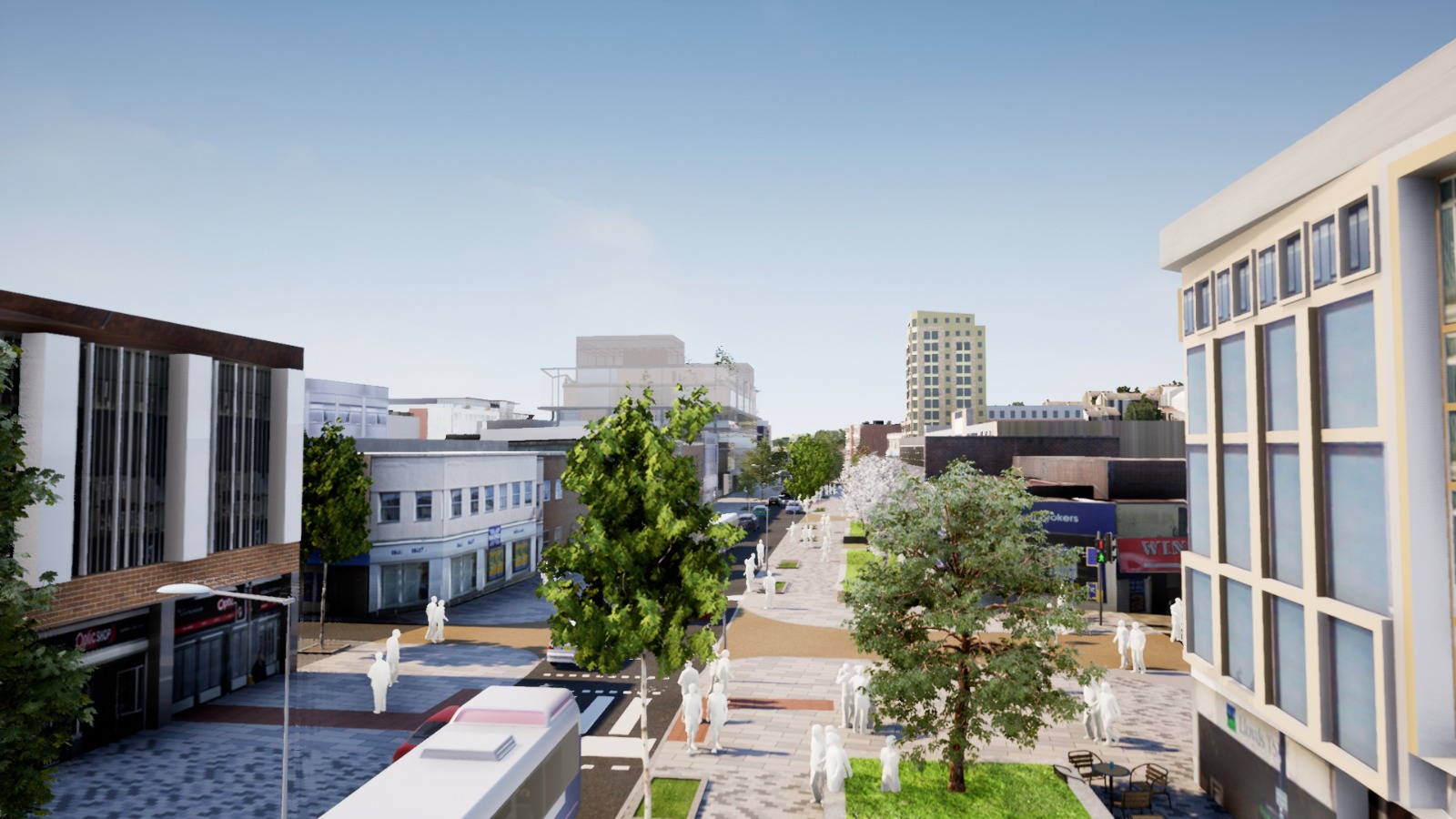 Russell Greenslade, chief executive of Swansea BID (Business Improvement District), says “We all know our city centres and high streets are changing and it is clear that Swansea is embracing this inevitable change in a very positive way.

“We have never seen a more ambitious regeneration programme in our city centre and this is something we should all be proud of, optimistic about and we should get behind.

“Some very eye-catching student accommodation is being unveiled as we speak, our new arena is taking shape.

“We are not clinging to the old model of the high street – we are embracing the future and the opportunities it brings, as we see consumers continue to expect to use their city centres as community hubs and as places to live and to spend their recreational time rather than simply to make a fleeting visit to its shops.”