New four-star hotel will be built in Mumbles 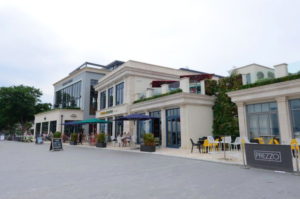 New four-star hotel accommodation is coming to Mumbles as part of the second phase of the Oyster Wharf scheme.

Work on the 16-room development at Tivoli Walk is expected to start next March, and will take around nine months to complete.

The hotel rooms will be set back on the first and second floors, with a larger commercial area on the ground floor for retail and food and drink units.

Swansea Council planning officers have set conditions as part of their approval of the seafront scheme, which already had outline consent, including on sound insulation and drainage.

James Morse, managing director of developer Nextcolour Ltd, said: “I’m really positive that decent accommodation will benefit Mumbles and that there will be a demand for it.”

The first phase of the Oyster Wharf scheme has delivered four restaurants, retail units and a piazza, and been credited with attracting more footfall to the area.

There won’t be any dedicated parking for the hotel rooms, but a design and access statement submitted on behalf of Nextcolour Ltd said Swansea Council was looking into the idea of additional parking in the vicinity.

A council spokesman said this was being considered, but that no decisions had been made as yet.

Mr Morse also said that the new Tivoli Walk development, which would retain the walkway between the promenade and Mumbles Road, would not affect the three adjacent tennis courts.

New hotel rooms are also planned as part of a separate scheme at Mumbles Pier headland, while long-standing Mumbles Road business Patricks With Rooms was given permission this summer to convert 10 hotel rooms into flats and a residential unit.

Mumbles Community Council chairwoman Carrie Townsend Jones said the community council had not formally discussed the Tivoli Walk scheme because councillors had expected it to be determined by Swansea Council’s planning committee. She said her view was that Oyster Wharf had benefited the area. She added: “I think on the whole that people feel we could do with some nice hotel rooms.”

Mr Morse said commercial space had to be included with the hotel rooms’ proposal because the area was defined as a district centre.

“You have to have vitality on the ground floor,” he said. “You could not do it any other way.”