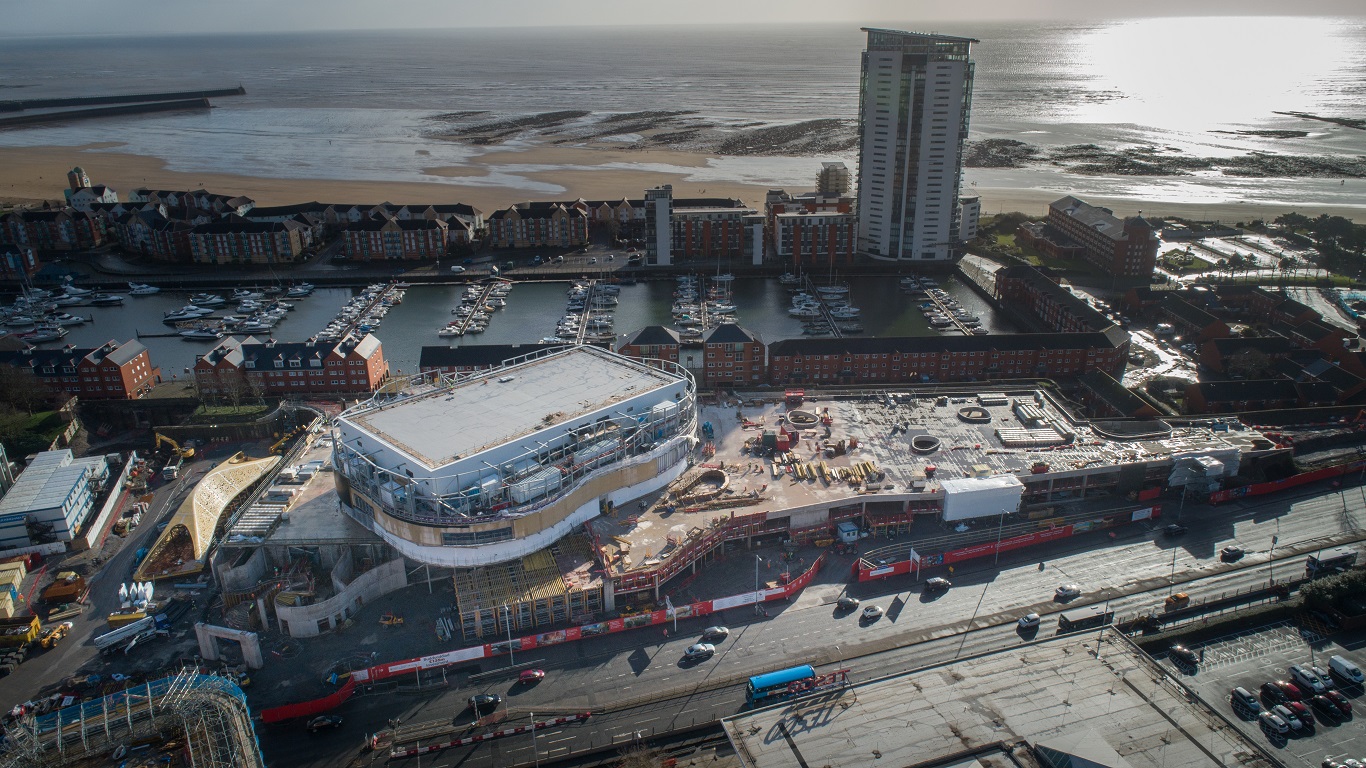 The emerging Swansea arena and parkland, centre, with the Marina and bay as a backdrop. Pic: Buckingham Group Contracting Ltd

The drone photos from main contractor Buckingham Group Contracting Ltd show how the development’s parkland and 3,500-capacity indoor arena will complement the neighbouring marina and sweeping bay. When complete, the arena will have a skin of around 93,000 programmable LED light bulbs; it will host top class entertainment and a range of conferences.

They show how the development’s other main block – for homes, commercial units and parking – will stand as a new city centre beacon, with the traditional residential areas of Townhill, Mayhill and Mount Pleasant as a striking backdrop. It’s 24m tall.

The two sides of Copr Bay Phase One, close to the LC, St David’s Church and Tesco Marina, are set to be linked over the main Oystermouth Road by a 50m-long landmark bridge for pedestrians and cyclists. This will help bring the city and sea closer together.

Work on the scheme – with a number of South Wales firms working on site along with others – has progressed on schedule through the pandemic. It is due to open in the second half of this year. 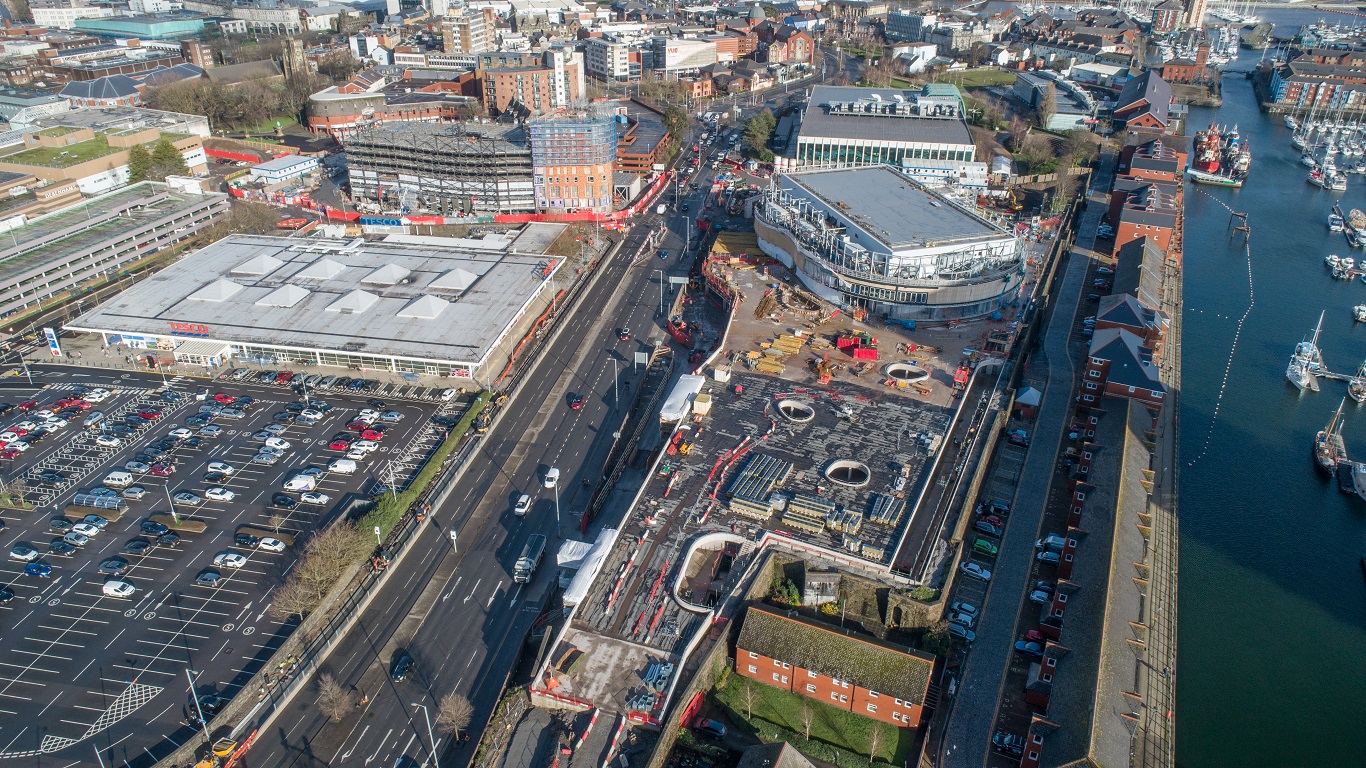 The emerging Swansea arena and parkland, centre, with Copr Bay Phase One’s homes, commercial units and parking, top left. The Marina is to the right, and Tesco Marina to the left. Pic: Buckingham Group Contracting Ltd

The emerging Swansea arena with the bay as a backdrop and Oystermouth Road to the right. Pic: Buckingham Group Contracting Ltd

Council leader Rob Stewart said: “This transformational project is on track and moving ahead as we had planned.

“Copr Bay Phase One is a brilliant new addition to our city and is a catalyst for the city’s £1bn regeneration story.

“It’s creating much needed jobs and when open will attract shows, events and conferences, bringing many new tourists and visitors to Swansea as we emerge from the pandemic.

“I thank the workers there – including many from Swansea and South Wales – for making amazing progress whilst staying safe and working to latest government guidelines.

“Swansea has continued its biggest ever regeneration during the pandemic lockdowns and is becoming a city where more people want to live, work, study and enjoy quality free time.” 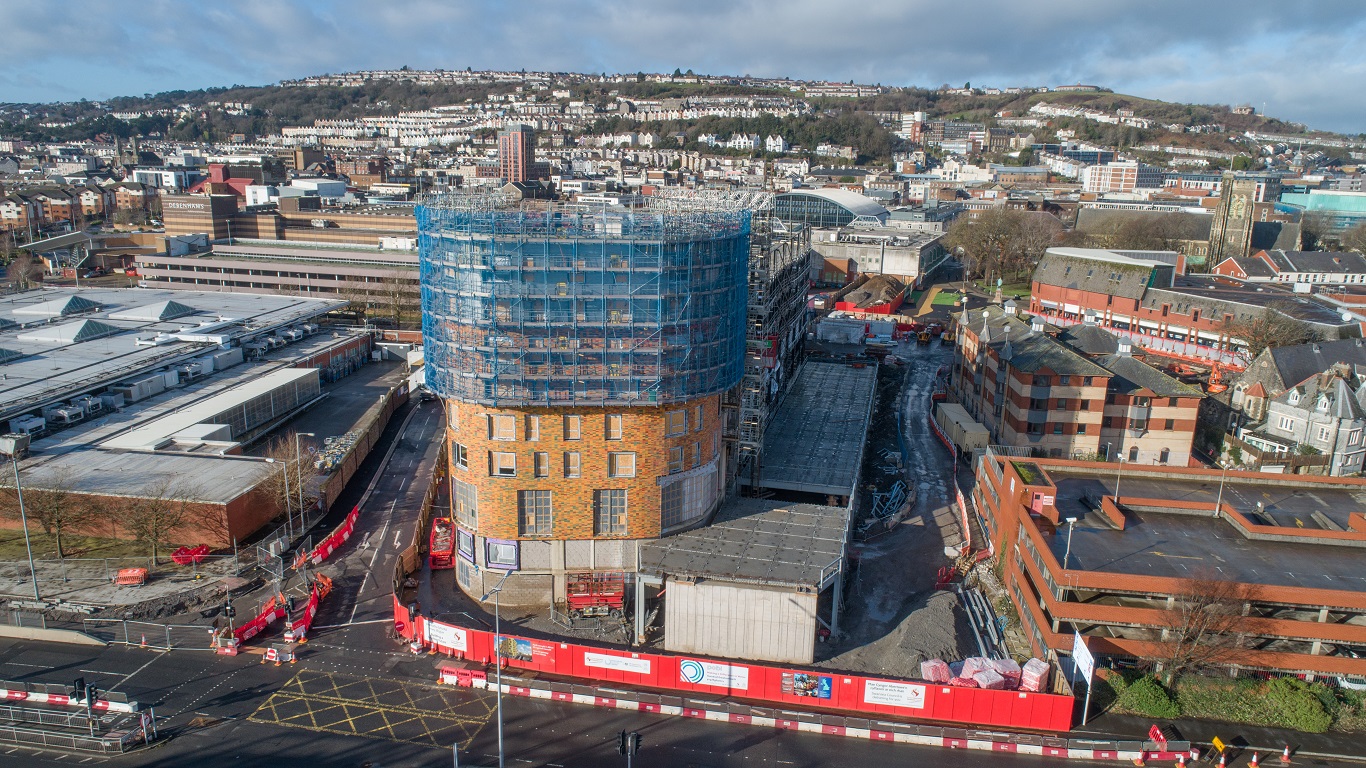 Copr Bay Phase One will include the new coastal-theme parkland with cafe-restaurant next to the arena, more than 30 homes managed by Pobl, commercial units and almost 1,000 parking spaces. The arena will be managed by ATG, a world leader in live entertainment; they are already looking for local businesses to be involved.

Work is already well advanced for the council to attract high-quality new development partners for Copr Bay Phase Two and a number of other strategic sites in and around the city centre.

Already, the city centre is becoming greener and hundreds of homes are being created along with dynamic new modern workspaces.