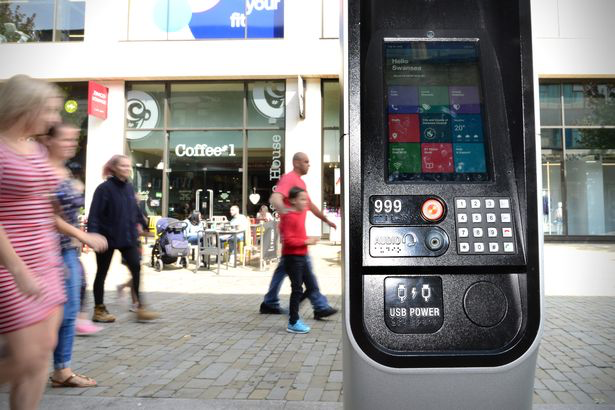 People in Swansea are the first in Wales to be able to charge their mobile phone, make free calls, and surf the net using ultra-fast wi-fi in the street.
Eleven new InLinkUK multi-media hubs went live across Swansea on Thursday August 30, replacing many of the BT telephone boxes that have been taken away.
The hubs are part of a move by BT to modernise their phone boxes and bring their public services into the 21st century.
There are 161 kiosks live in four other cities: London, Leeds, Glasgow and Southampton. The day before the launch in Swansea, the first hubs were being installed in Cardiff, the next city lined up to get the new technology.
We went along to the official launch at Princess Street in Swansea, to check them out and see for ourselves just how easy they are to use.
Making a call
It was pretty straightforward to make a call. 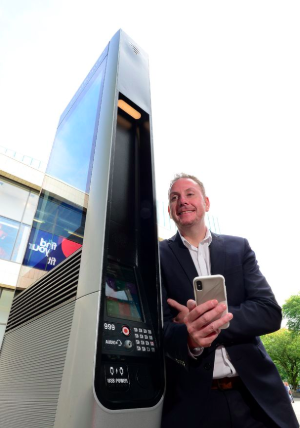 Using the touchscreen, it was just a matter of tapping the "free calls" tile.
Tapping the "voice call" icon then opened a keypad on the screen. After dialling the number using the touchscreen and tapping the "call" button, the telephone call was started.
At the end of the call, you can hang up by pressing the "end call" button.
Volume is controlled using a slider on the screen, or plus and minus buttons on the keypad. Alternatively, you can plug in your own headphones for more privacy.
There is also an "acoustic envelope" which is designed to capture sounds and amplify them for the listener only, thereby enhancing privacy, said Jessica Tompkinson, head of communications and external affairs at InLinkUK.
Surfing the web 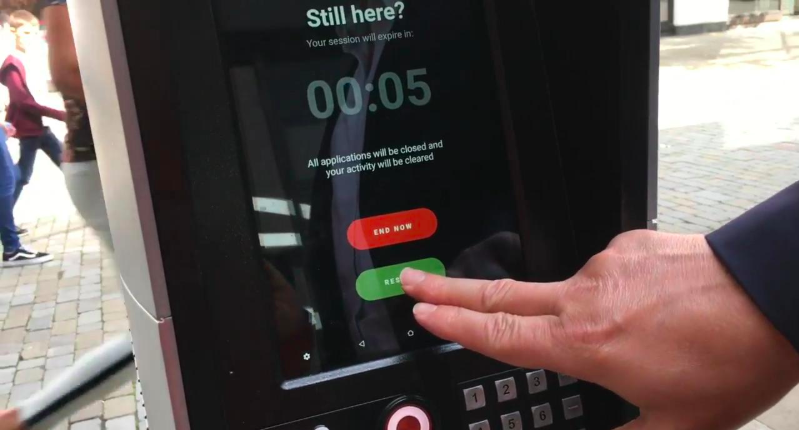 You can connect to the InLinkUK by BT network using your phone, laptop, tablet or even smart watch.
Head to "settings" on your device, and select the "InLinkUK by BT" network.
In less than three seconds, a page opens up with a prompt to "connect". This is the registration page, where you have to type in your email address and check a couple of boxes depending on whether you want to receive emails from BT in the future or not.
You only have to hand over your email address once though, although if you don’t log back in within six months, you will have to register again.
Wi-fi speeds of up to one gigabit (1,000Mbps) meant we could download a standard film in less than 40 seconds.
And in less than 10 seconds, my phone completed 16 updates – something that would usually take around 45 seconds.
What’s more, there are no data caps or ads, so you can download as much as you want.
And you can continue to surf the web as much as 100 metres away from the hubs, meaning you can sit and browse in many of the coffee shops along the main streets like Oxford Street and Princess Way.
Is it safe?
According to Ms Tompkinson, the wi-fi network is "one of the most secure and robust out there" with minimal risk of people being able to hack into the network.
After all sessions at the hubs are finished, the data is wiped from the screen making it impossible for anyone to see what you were doing.
All calls are, however, logged by the device so police can still access communications data from each hub.
Furthermore, each device is set up with two cameras – one at the top, and one at screen level. However, Ms Tomkinson was quick to reassure people saying they were not switched on.
"The cameras aren’t switched on at all, either at the hardware or the software level, and we have no plans to do so," she said.
Police in London have indicated interest in using the InLInkUK hubs for surveillance purposes for the "community good", but this is not planned for Swansea.
Who looks after them? 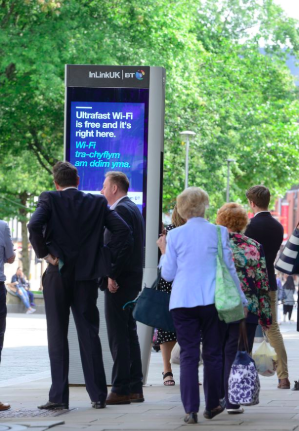 The hubs will be cleaned every two weeks by a specialist team, contracted by InLinkUK.
When graffiti or vandalism is reported, the team are sent out immediately to carry out repairs and maintenance.
The biggest problem was chewing gum and mess from seagulls, said Ms Tompkinson.
The digital screens on the side of each hub will be used for advertising, as well as some in-house content generated by InLinkUK themselves.
This is what pays for keeping the hubs fully maintained and operational. They have been rolled out at no cost to either Swansea Council or the public, with each one costing around £50,000.
Can anyone use them? 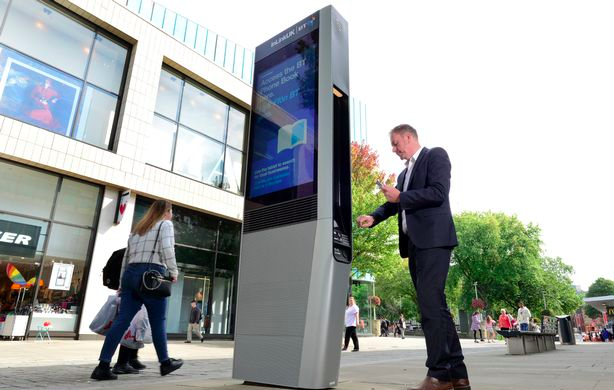 There are 11 kiosks now up and running in Swansea, with one more due for completion. Around 20 more traditional telephone boxes will be kept in operation, to allow BT to fulfil its universal service obligations.
InLinks are designed for universal accessibility, including for people with sight impairment.
They have a wheelchair height braille interface, hearing induction loops, and TalkBack functionality to ensure a fully-accessible service.
The table also features BT apps, including the Next Generation Text Relay app, to enable deaf and hard of hearing users to communicate.
The screens also serve as a community noticeboard with more than 1,000 hours per year of hyper-local content, including promotion of local events.
"I was sat in the coffee shop opposite and watched an elderly gentleman wander over and have a play." said Ms Tompkinson.
"Then, a bit later, a child made a call to his mum with the help of his father. These hubs really can be used by everyone and it’s great to see people of all ages and generations getting to grips with the technology."
WalesOnline