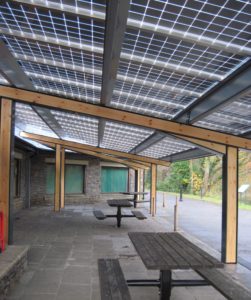 Neath Port Talbot Council has topped the list of all 22 Welsh local authorities when it comes to renewable energy generation.

This is due to the commissioning of projects such as the Lynfi Afan and Mynydd Brombil onshore wind projects and the creation of biomass, solar and other renewable energy schemes across the County Borough.

While having the greatest amount of renewable energy generation in Wales, Neath Port Talbot Council is also in the process of developing a new Decarbonisation and Renewable Energy Strategy.

And at the same time, the Council is continuing with a wide range of projects, aimed at creating a cleaner, greener future for the area.

One of these involves the Council playing a central role in a multi-million pound project to create next generation low carbon energy systems. Neath Port Talbot is the base for the only demonstration area in Wales for FLEXIS, the £24.5m research operation aimed at developing an energy research capability in Wales.

“Working with a wide range of partners we continue to work on our decarbonisation agenda for Neath Port Talbot– as evidenced not only by these figures on renewable energy generation but also by the many other initiatives we are involved in to help improve the environment.”

The Council is continuing to assess the suitability of alternative fuelled vehicles within its fleet, works closely with departments to ensure these vehicles can be introduced at the right times, and continues to move with the latest standards for both vehicles and plant.

And the authority is taking the lead on promoting and delivering the Homes as Power Stations project as part of the wider City Region Deal. This aims to deliver smart, low carbon, energy-efficient homes through a co-ordinated approach across the City Region.

A pathfinder scheme is already being developed at a site in Neath, where 16 houses and flats are being built which will generate, store and release energy – and therefore don’t need boilers.

Other projects include a 30kw hydro-electric scheme due to be installed at Margam Country Park, a solar power generating roof at Gnoll Country Park (already installed and generating energy) and active travel routes which encourage people to walk and cycle instead of using cars.

As part of the Swansea Bay City Deal the Council has also programmed the construction of the Swansea Bay Technology Centre to support start-up companies and indigenous business growth with a focus on the innovation and research and development (R&D) sectors. The centre, an “office as power station” project, will work closely with the University of South Wales’s Hydrogen Centre.