South West Wales Connected is hosting community vision meetings across the region, in towns and villages around railway stations, to give local people more of a voice about the challenges and opportunities as they see them.  This was the second meeting in Milford Haven (virtually via Zoom) to try and move some of the ideas and aspirations forward.

These notes are also available in PDF format here.

Broadly speaking, these meetings are about three interconnected themes:

Creating a greater sense of place and pride of place

Amplifying what is distinctive, positive and strong about local areas – what do we love, what are we most proud of, what do we want to be famous for?

Giving local people a voice, joining the dots between good things that are happening locally, empowering people to get involved in local projects, and looking at environmental interventions, like green spaces, community gardens, encouraging active travel and engaging young people.

Improving the arrival experience for visitors

What do people see when they get off the train, and how can we make it a more positive experience?  Tackling challenges like way-finding, tourist information, highlighting local attractions and independent businesses, and ensuring connectivity with the best that the local area has to offer.

RECAP OF THE PREVIOUS EVENT

This was the second Community Vision Meeting for Milford Haven, following a well-attended and productive initial conversation back in July 2020.  At that meeting, some clear opportunities were identified, and local people, businesses and organisations shared information and ideas about what they would like to see.  The issues emerging from the first meeting can be summarised as follows:

Since July, South West Wales Connected, Milford Haven Port Authority, Transport for Wales, Network Rail, the town board and other regional stakeholders have continued to meet at intervals, to try and address these issues and progress some of the ideas. 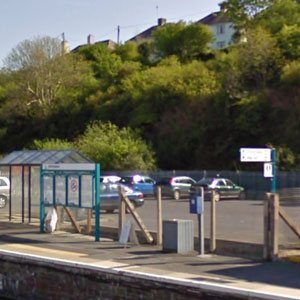 The town board has formed the Visit Milford Haven tourism association for the town, working on a new brand and campaign website, which is a great step forward and provides a stronger sense of what Milford Haven is all about.

On arrival in Milford Haven by train, first impressions aren’t great!  And there’s a risk that people bypass the town / waterfront altogether by just jumping in a cab and going elsewhere in the county.  But there is so much to celebrate and highlight in the local area, so many reasons for people to stay and explore the town – these things need to form part of our shared understanding of Milford Haven as a place, as we move forward:

WHAT WE’D LOVE TO SEE

An exciting initiative arising out of the first meeting is the emerging proposal, supported by Transport for Wales, to develop some kind of temporary buildings for improved station facilities in the short term – for example by repurposing shipping containers into sustainable “eco buildings” that could house a waiting area, potentially a coffee shop, and some information for visitors.  The idea would be to develop a short term solution to address a chronic lack of facilities at the station, in the interim period before more permanent, expensive and complex solutions are developed by the local authority.

Today’s meeting asked “what would you love to see” as part of this proposed intervention, and the following ideas emerged from the discussion:

People also noted that a major priority will be to keep local people informed about plans and proposals, and to make sure people realise that the “shipping container” idea is a SHORT TERM interim solution prior to the Council’s major investment in the station.  We don’t want members of the community to think they’ve been short changed and that all they’re getting is a few shipping containers – and we also want local people to get involved in the conversations, so a community information board was considered by today’s meeting to be a major priority – something that we should be able to progress straight away.  “Change is Coming to Milford Haven Station – Be Part of It” – acknowledging that the existing facilities are inadequate and letting people know that people are working on solutions.

COUNCIL INVESTMENT IN THE STATION

Alongside these conversations about a short term / temporary / demountable solution proposed by the CRP and Transport for Wales, residents may already be aware that Pembrokeshire County Council has been progressing exciting long term plans for a new station and integrated transport hub in Milford Haven.

This image shows some of the problems that Atkins has identified in relation to Milford Haven station, which their upcoming scheme will seek to address: 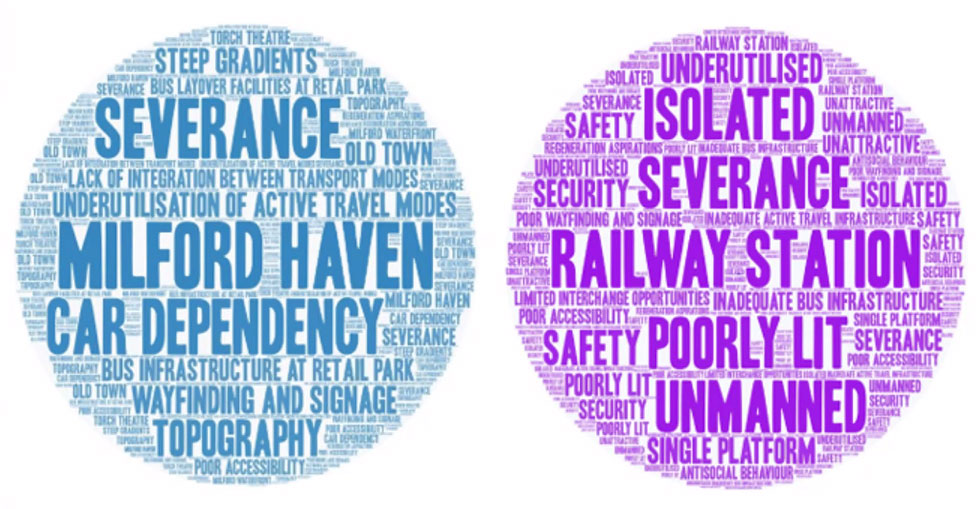 This list shows the objectives that the new station should seek to achieve for Milford Haven (this is Atkins’ list):

And this image shows the proposed layout developed in 2014 – which doesn’t necessarily reflect current thinking and priorities, but which is a useful starting point for discussion.

The Council has just secured funding for the next stage of this process, to start developing a detailed design, and is working with Atkins to progress through the “WELTAG” process.  George Lance from Atkins was on hand to present the current thinking and show initial plans from 2014.  It is really important that members of the community engage with these plans and have their voices heard, to ensure that what gets built in Milford Haven really addresses the right issues.  There will of course be a full formal consultation process as the plans move forward, but through the Community Rail Partnership we hope that the community can have a voice earlier and more strongly in shaping the proposals.

People in today’s meeting expressed the sincere hope that the goals and ways of working outlined in the Wellbeing of Future Generations Act, and the Welsh Government’s latest Transport Strategy, are properly embraced in the plans for a new station – as well as the issues of connectivity with the town and the waterfront, which are emerging as a key focus for the community.

Some participants expressed concern that the proposed solution is “an engineering solution that prioritises car users and the retail park”, whereas what is needed is an “urban design solution” that better addresses wider issues and opportunities, such as placemaking, connectivity with the core town centre and the waterfront, sense of place, active travel, green space, and creating a cohesive community.  We hope that Atkins will proactively engage with our group, through the community rail partnership, to ensure these ideas and priorities make it into the final designs.

Please get in touch if you would like to be included as our Milford Haven projects emerge and move forward – everyone is welcome and everyone has a valuable contribution to make.  Please email zoe@4theregion.com and jennifer@southwestwales.co for more details, to update us on local projects, and to get involved in working groups to take ideas forward.

South West Wales Connected aims to facilitate community-led initiatives and provide a forum for local people to have a voice.  We want to break down silos and enable more sharing of information with and among the local community.  We will lobby on behalf of communities to make change happen, and we can’t do anything without the support and involvement of local people – so please get involved and spread the word so that together we can make positive things happen!