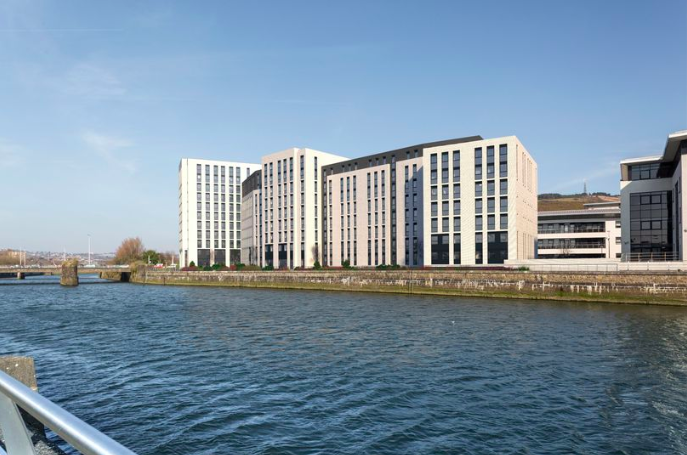 A relieved developer has welcomed the approval of a 645-bed student flat scheme in Swansea’s SA1, and said it should be ready by September, 2020.
David Caplan, senior partner at Crown Student Living, said the £40 million riverside scheme would mainly cater for overseas students.
Swansea’s planning committee approved the seven to nine-storey development, with five councillors voting in favour of the officers’ recommendation, one objecting and three abstaining.
The committee had turned down the development — then comprising 591 rooms — in August, but the decision was deferred amid warnings of appeal costs so that more discussions could take place about issues such as parking and rubbish collection.
Mr Caplan said of this week’s decision: “It is excellent news”.
He said the new internal layout would not decrease the size of the rooms, despite more of them being created.
This is what the bedrooms will look like in the new student apartment block on Kings Road, SA1 Work to prepare the site has been taking place for months as Crown Student Living had bought the Kings Road plot, which is just off Fabian Way, with a previous planning permission for a 500-bed student building in place.
That original permission had been granted on appeal by a Welsh Government-appointed inspector after the planning committee turned down the scheme.
Mr Caplan estimated that the various redesign work, delays, and site preparation and remediation work had cost in the region of £2 million.
The building will have 27 parking spaces and be managed by a company called CRM Students.
Parking was not an issue for Crown Student Living’s other UK student blocks, partly because overseas students tended not to have cars, said Mr Caplan.
Car use restrictions at the Kings Road apartment block will be set out as part of students’ tenancy agreements.
The developer must also contribute £139,000 for road and pedestrian improvements in the area, and submit a waste collection strategy to the council before students start living there.
The site will be a short walk to the University of Wales Trinity Saint David’s new SA1 campus and a few minutes’ bike or bus ride to Swansea University’s Bay Campus, off Fabian Way.
Supporters of Crown Student Living’s application included Swansea University’s head of the school of management, Professor Marc Clement, who said in a letter to the planning authority that he was impressed by the plans.
“We believe that there is demand for this style of student accommodation in this area,” he said.
WalesOnline