Mal Pope, singer, musician and producer, has been urging people and businesses to get involved in the upcoming Swansea City Centre Conference, and says now is the time to reclaim a sense of ownership of our city and its fortunes.

In an interview with 4theRegion, Mal said, “We have to look back at our heritage.  Our great grandparents got together and made things happen, they built things themselves, without outside funding.  We can’t expect other people to always do things for us, to improve our own lives, because, after all, it’s our city.  It’s changed so much in my lifetime, and I think it’s time to claim ownership of it again.”

The City Centre Conference on Tuesday 9th April aims to do exactly that, bringing individuals, businesses, projects and organisations together with a shared sense of purpose about shaping a thriving future for the city centre and the wider region.  Open to residents and businesses alike, the Conference will be the largest gathering of its type in Swansea for many years, and organisers hope it will spark a new era of engagement and empowerment for all those who are ambitious for the future of the city. 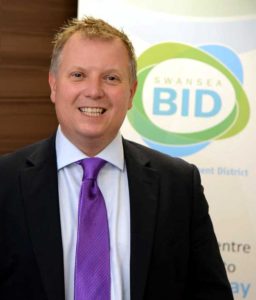 Russell Greenslade, chief executive of Swansea Business Improvement District, says Swansea BID is pleased to be partnering with 4theRegion to deliver the event.  “Swansea BID represents more than 800 City Centre businesses across a broad mix of sectors so we see first-hand how much vision and commitment is shown by the business community here, to ensure Swansea is a vibrant and forward thinking place to shop, visit, stay, study and do business.

“Being a champion for Swansea City Centre is in our DNA as a BID. And seeing its unfolding regeneration is encouraging – the City Centre has a real spring in its step.  The City Centre Conference & Exhibition will see businesses leaders, decision-makers, investors and residents voice their ambitions for the city.  We are pleased to be part of Swansea’s continuing evolution and to see the city embrace the modernisation it needs in order to thrive in these shifting times.”

Swansea BID organises and promotes scores of events to actively promote and support the City Centre and its businesses, as well as liaising with investors and potential investors to encourage them to set up businesses in Swansea, whilst co-financing and supporting vital services, such as the Rangers, Taxi Marshals and Cleansing Team.

Dawn Lyle is director of Regional Engagement at 4theRegion, a local organisation which promotes a citizen-led, broad-based collaborative approach to making change happen in South West Wales.  She says it’s important to 4theRegion that all sectors of business and society are represented at the event.

“We know that the best ideas and solutions often emerge from conversations involving the greatest number and diversity of people.  So that’s why we’re keen to see everyone who’s interested in the future of our city coming together to share their projects and contribute their views.  It’s not the kind of conference where you just listen to experts speaking from the stage.  It will be a showcase of all the great things that people and organisations are already doing in our city, and the chance to be part of real conversations around future opportunities and what we can all do, to make change happen.” 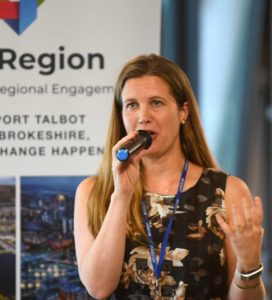 The Conference itself takes place at the LC on Tuesday 9th April, and it’s free to attend, whether you can stay all day or want to drop in any time between 9am and 6pm.  The full programme of speakers is yet to be announced, but entertainer and entrepreneur Mal Pope will be hosting the morning session, telling the story of his various City Centre projects and sharing his aspirations for the future of Swansea.

“It’s going to be a great day,” says Mal.  “When you bring people together, you never know what sparks will fly.  I might have a good idea (or I might have lots of terrible ideas!) but someone else might have something, and you listen, you talk to people, and that’s when the magic happens – that’s when projects happen.  So I’m really looking forward to the City Centre Conference, and I hope people will give their voices to the project as well.”

Swansea Council is driving forward a number of major regeneration projects in the city centre at the moment, including huge upgrades to the Kingsway, the roll-out of ultrafast fibre broadband, and starting work on Phase 1 of the Swansea Central scheme, which includes a new 3,500 capacity digital arena and city park.  The City Centre Conference & Exhibition will showcase these major projects, alongside the many varied investments and initiatives being led by independent organisations and businesses who are committed to the future of the city centre.

To book your free place at the City Centre Conference & Exhibition, go to www.4theRegion.org.uk/citycentre.  Exhibitor enquiries can be sent to zoe@4theRegion.org.uk, or call Zoe Antrobus on 07979 578494.