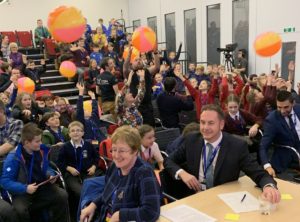 A team of budding computer programmers from the school in Port Talbot have been busy all term designing their own computer game from scratch for entry in DVLA’s Code Challenge.

Their entry, which was based on the theme of designing an ecological system for a brand new planet, was voted the best in their age category by fellow pupils, out of around 50 entries submitted by teams of youngsters across Wales. They were presented with their award by DVLA Chief Executive Julie Lennard at a gala event hosted by the BBC’s Lucy Owen at DVLA’s digital theatre in Swansea on Tuesday.

Teams from Gwyrosydd Primary in Treboeth, Cadle Primary in Fforestfach and Pontlliw Primary also received awards for being among the best entries.

Around 200 children and 150 adults attended the packed-out presentation event, with thousands also taking part in the action via a live web link, which saw over 2,500 votes cast remotely. 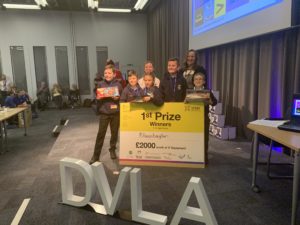 As part of their busy day, pupils and their teachers were also given the chance to meet with the event’s associate partners, including all four of the Welsh Police forces, Wales Air Ambulance, Mid and West Wales Fire & Rescue Service, Road Safety Wales and the British Army.

Blaenbaglan Primary were declared overall winners in the age 7-11 category, with Cathedral High School in LLandaff scooping first prize in the age 11-14 category. The top 3 entries for each category, as well as runners up, were each presented with IT prizes to the value of £2000 for use in their schools.

“The entries this year have surpassed all expectations and I hope that many of these talented young people will one day consider coming to work with us at DVLA.

“All the young people deserve a huge ‘well done’ from us, but in particular I would like to congratulate Blaenbaglan Primary School and Cathedral School, on being voted the winners in their age group categories.

“There was a terrific atmosphere of fun and learning throughout the presentation day, and I’m very grateful to everyone who’s played a part in making this year’s competition such a success.” 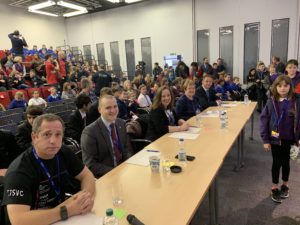 “I’m thrilled by the pupils’ achievement in coming first in the DVLA Code Challenge. Coding is, quite simply, an essential skill for the future and it bodes really well for everyone that these pupils choose to devote a huge amount of their free time to an activity they love, and that will help them so much in years to come”.

Caleb, a pupil from Year 5 in Blaenbaglan School, added,

“Computer coding is brilliant, it’s one of my favourite things to do. When I’m older, I really want to work with science or computers”.