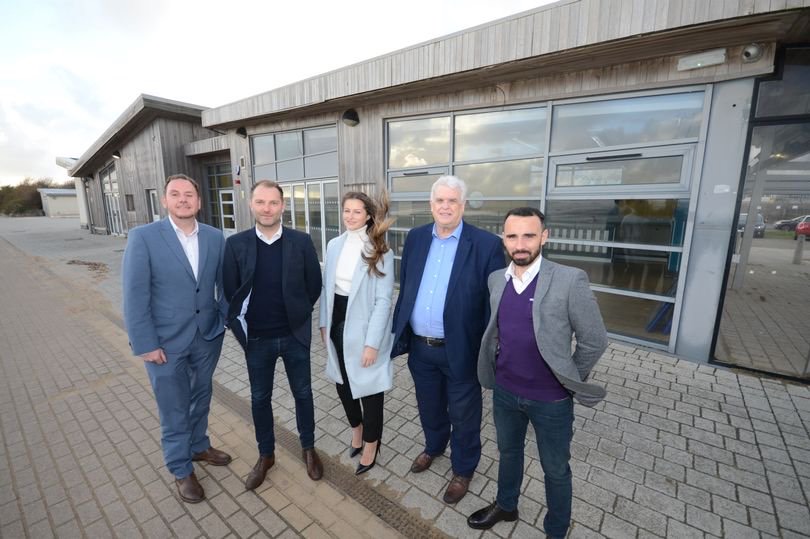 The new sports, restaurant and coffee bar venue, named ‘Seven’ in honour of Leon’s shirt number, will replace the former 360 café.
It will have a bigger sports offer as well as a restaurant serving food and music into the night and a coffee bar that’ll be open for breakfast called Seven Shack, open from 7.30am.
The new project will see a major extension of what’s already there and includes proposals for three separate but linked venues on the site – ‘Seven Shack’, the sports academy, and the ‘Seven Bar and Kitchen’ restaurant.
The dining and entertainment venue will be operated by Swansea-based brother and sister Ryan and Lucy Hole, who are behind the popular Uplands-based bar The Optimist, with a sports academy featuring a range of water and beach sports being overseen by Mr Britton.
Swans legend Mr Britton will oversee the management of an academy offering football, beach rugby, water sports, cycling, running, triathlon and swimming aimed at young people in particular.
Mr Britton said: “When the opportunity came up to redevelop the Café 360 site I took a look at it and thought it was an amazing location. The views are incredible all the way down to Mumbles. I thought it was a good opportunity to get involved, especially now I’ve finished playing football.
“I want to invest back into the city which has been great to me. It’s a really exciting project I’m looking forward to getting stuck into.”
Ryan Hole said: “As soon as the venue became available we were seriously interested. It’s an outstanding location. I spoke with Leon about our intentions and he was keen to get involved as he has always wanted to give back to his adopted hometown.
“Lucy and I have the experience of running cafe-bar/restaurants and with Leon’s experience of elite level sport, we feel it is a perfect match. We plan on creating something which Swansea can be proud of.”
Swansea Council had been searching for a new operator to breathe new life into the former 360 venue that was vacated in September.
Robert Francis Davies, the council’s cabinet member for innovation, regeneration and tourism, said he was delighted that a new operator for the venue had been found so quickly.
He said: “We were disappointed to see the 360 close earlier this year. But, as expected, we had huge interest from developers and operators for this site.
“I’m delighted Ryan and Lucy Hole together with Leon Britton will be taking on this development which will see a brand new facility created on this fantastic site on Swansea Bay.
“The transformation will be amazing. Seven is an incredible investment in the future of Swansea Bay that will attract many more visitors to this part of our city.
“We are one of only a few cities that fronts onto the beach and this site is one of the best locations in the UK with views right along Swansea Bay.”
“Seven will help to create an exciting and vibrant beachfront where people can enjoy great food, music and activities all-year round.”
Subject to final contract arrangements, Seven will take control of the former 360 site in early 2019. The council will continue to own the site and Seven will be its tenant under a 25-year lease.
WalesOnline