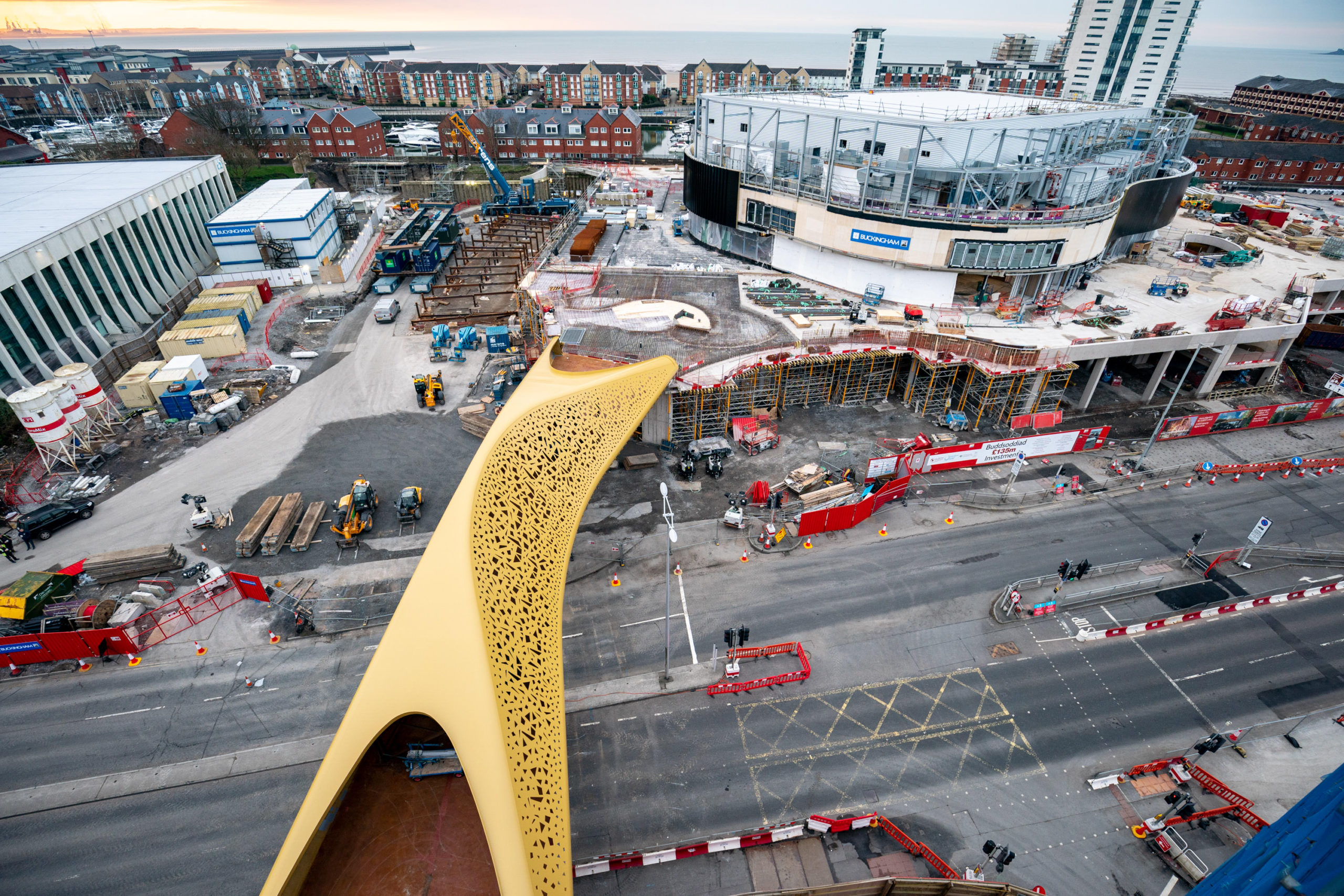 It will be pivotal in improving access between the city, the Marina and the coastline.

It will be a number of months before the gold-coloured pedestrian and cyclist bridge – central to Swansea Council’s emerging £135m Copr Bay Phase One regeneration scheme – will be ready for use by the public. 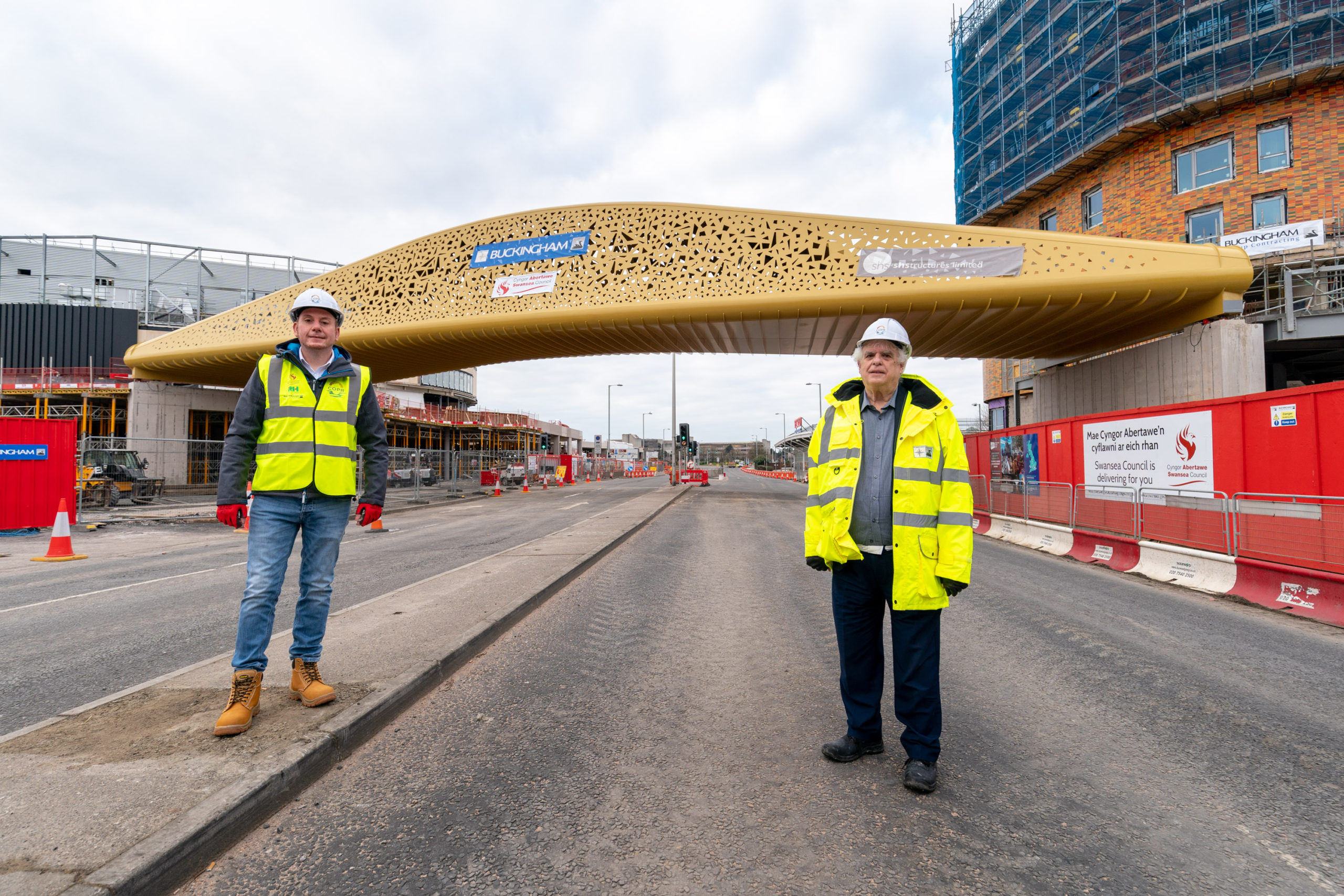 Council leader Rob Stewart said: “This is another big milestone in the transformation of our city.

“With its bold design and striking façade that will complement the new state-of-the-art arena, the bridge will become a stunning new landmark for the city and an emblem nationally and internationally of a modern welcoming city.

“The work we’re doing couldn’t be more timely for Swansea and Wales as we emerge from the pandemic.

“We’re transforming the landscape, and we’re creating jobs, new opportunities and a new future for our city centre. The bridge, when completed, will be part of that bright future.”

Council cabinet member for investment, regeneration and tourism Robert Francis-Davies said: “The new bridge will be a permanent beacon that tells people what Swansea is all about: an open, vibrant destination where opportunities are created and barriers overcome.

“Swansea will be the city held up as the model post-pandemic place, where people can experience the best of both urban living and the wonders of nature. Swansea has it all – and, with our memorable new bridge, we are making it clearer than ever that our city is open.” 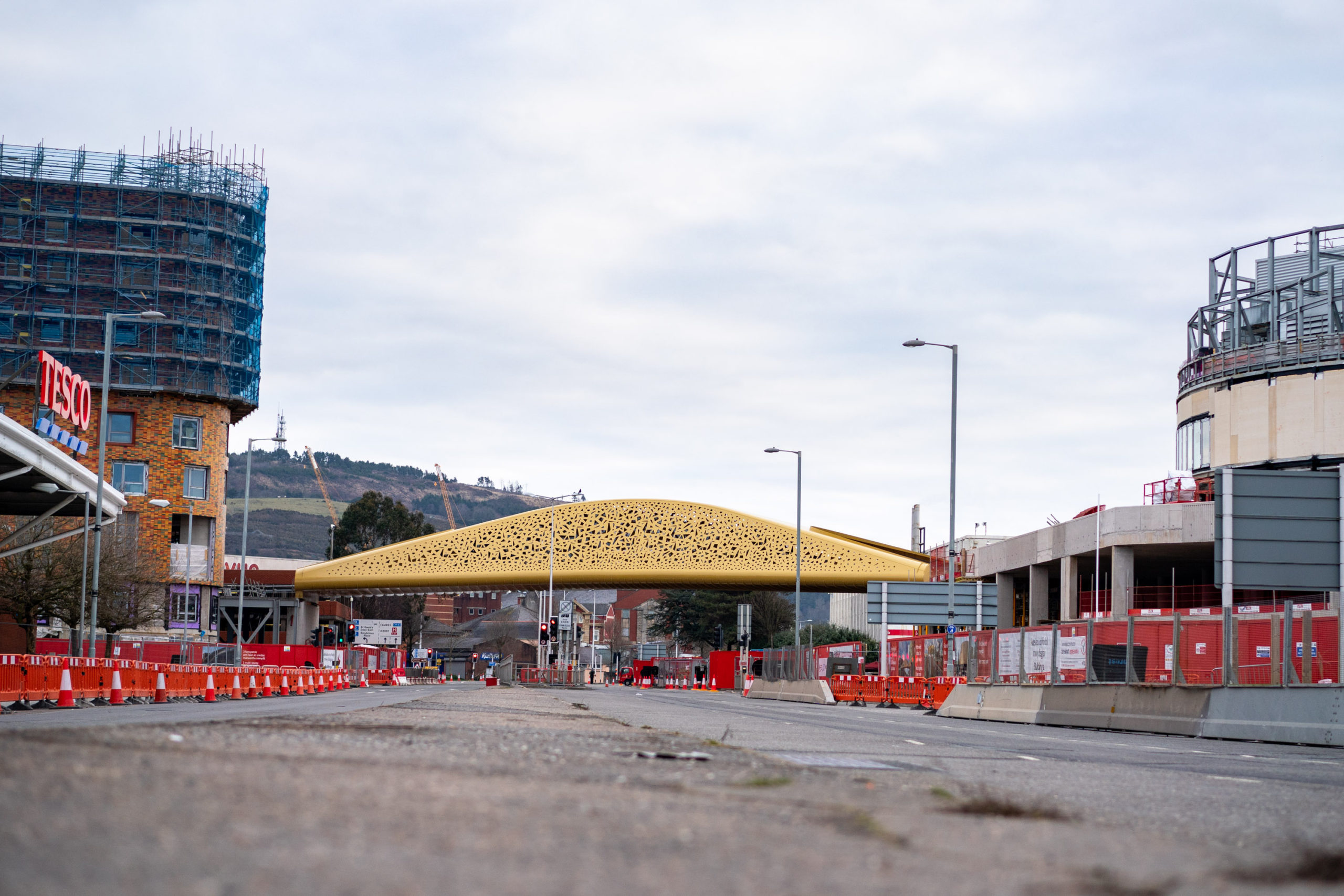 Swansea-born artist Marc Rees, who designed the pattern on the bridge’s side panels in collaboration with award-winning architects ACME, said: “I’m looking forward to seeing the bridge in situ in all its glory.

“It’s been a difficult time recently, especially for the cultural sector, so the bridge installation is timely as we need a positive and aspirational symbol.”

Friedrich Ludewig, Design Director for ACME said: “The new bridge is a true piece of international innovation for Swansea.

“ACME worked with Brussels-based structural engineers Ney & Partner to design this bridge made from steel plate.

“The iconic arch stabilizes the super-slender bridge deck and creates a new urban space floating over the road, enclosed by patterned steel offering glimpses across the road, the arena and the new coastal park.

“Until now, Oystermouth Road was for cars, not people. The bridge will be a stepping stone for a greener and more liveable Swansea city centre.” 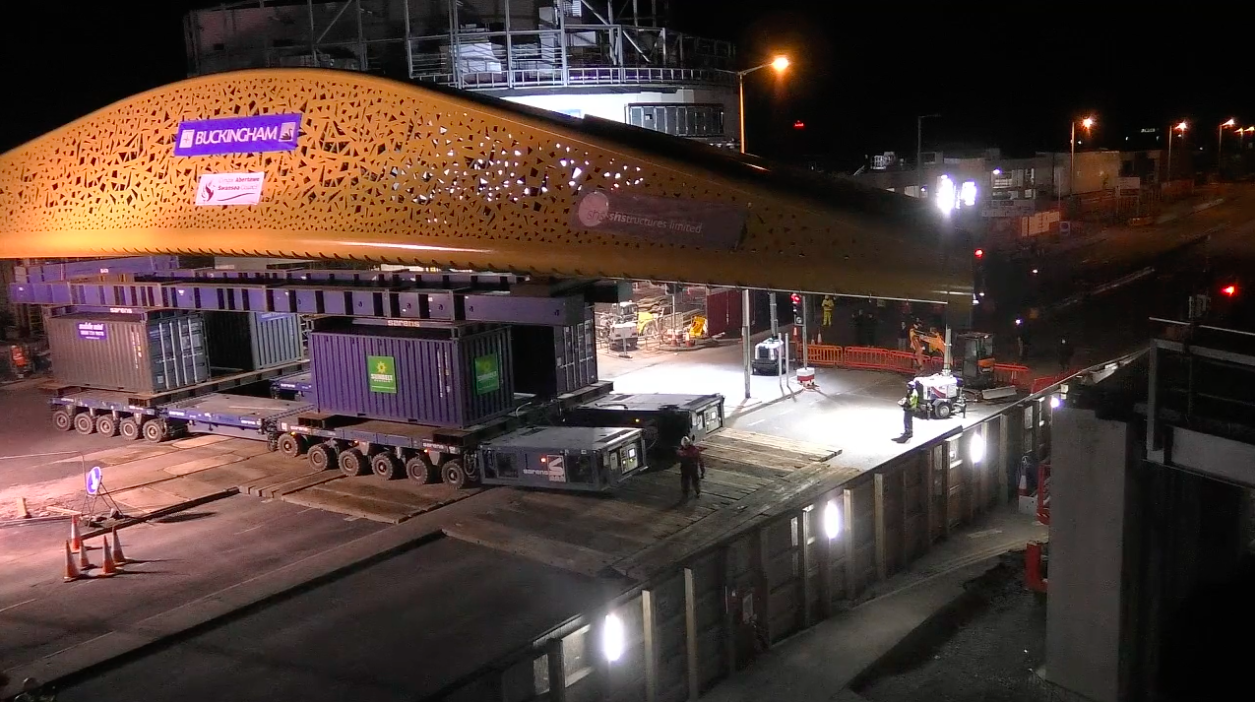 The work to ease the distinctive bridge into place was carried out by specialist contractors using two huge mobile transporter units. 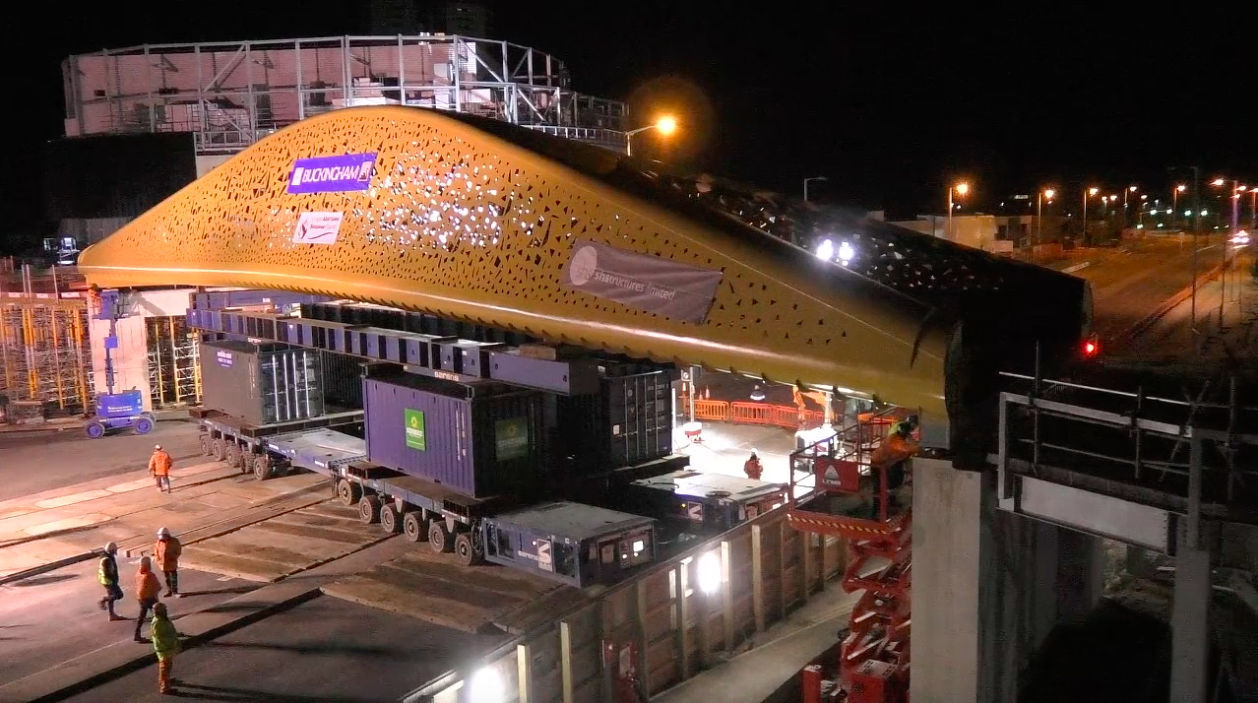 The transporter units, remotely controlled by specialist operators, slowly swept around on a path of around 100m to position the bridge above the abutments. 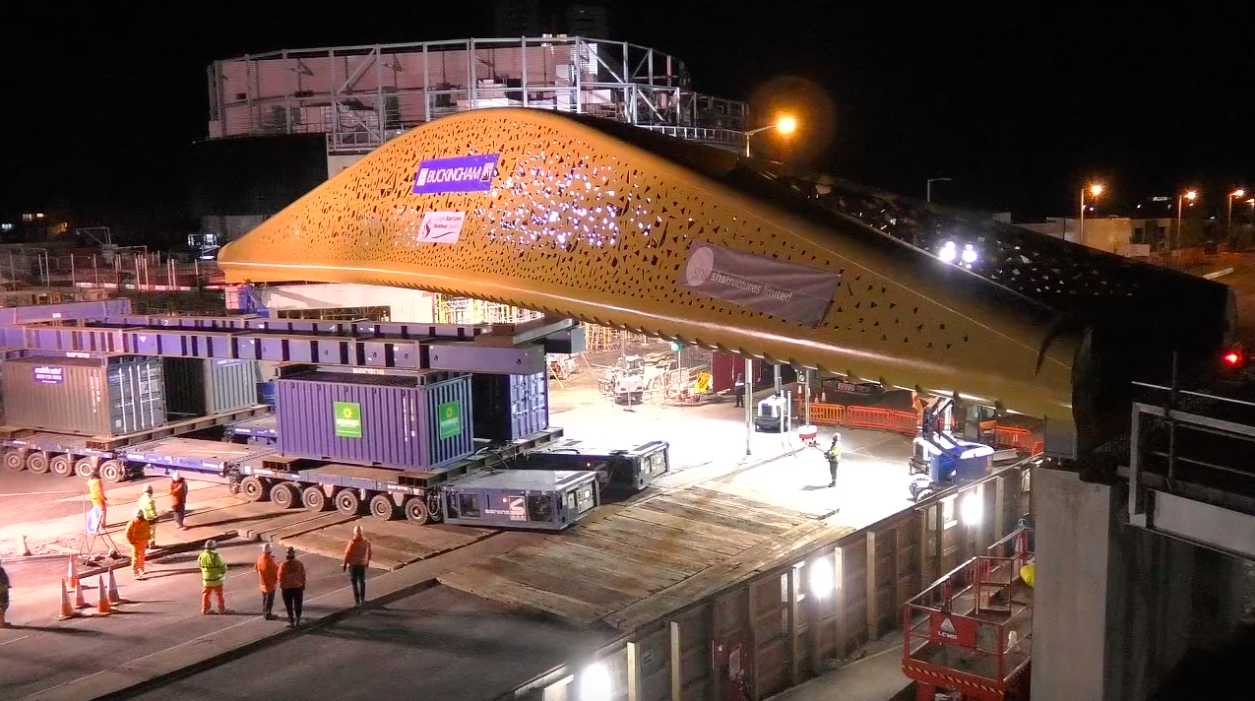 It’s expected the bridge will be ready for use in the second half of the year, ahead of the opening of the arena which is on schedule to be completed this year.

Oystermouth Road was closed temporarily to traffic during the operation and diversions were in place.

Disruption was designed to be minimal.

Due to the pandemic people were urged not to visit the city centre to watch the operation in progress. Instead, they could watch a live online video feed of the operation. 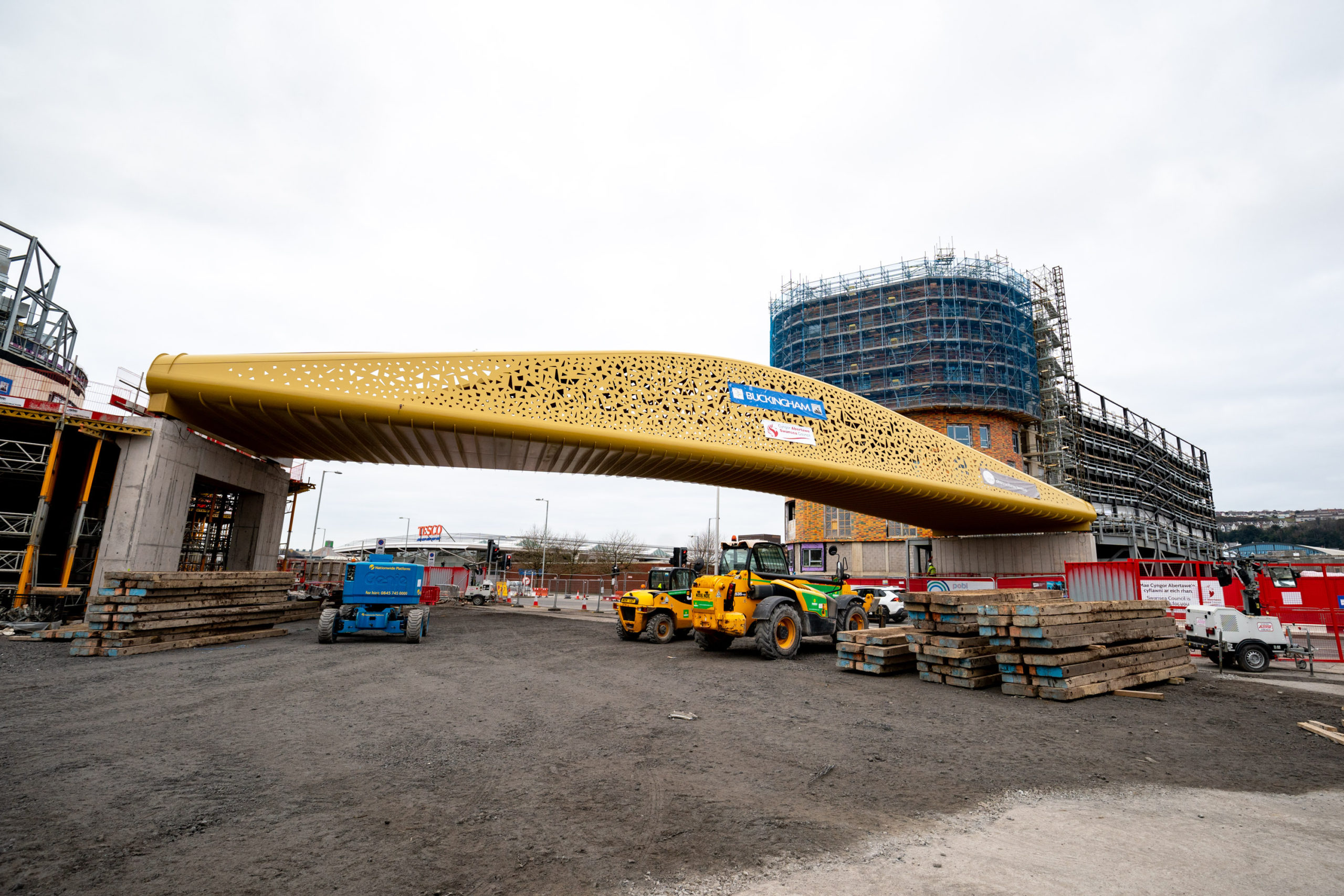 The bridge over Oystermouth Road is a critical element of the Copr Bay development. Acting as a gateway within the city, it will provide an easy link for pedestrians and cyclists from the main city centre to the new arena, its urban park and café-restaurant and onwards to the marina and Swansea’s famed coastline.

It’ll encourage footfall between Copr Bay area and the core city centre, encouraging the hundreds of thousands of visitors a year to the arena and its urban park next door into the shopping areas of the city centre.

The deck of the bridge – effectively two storeys above the road – will lead on the level to the arena’s pedestrian entrance and to the parkland. On the other side – a broad shallow ramp will lead from the bridge down towards the area between St Mary’s Church and Iceland. The ramp will have homes, car parking and commercial units such as independent cafes on one side. On its other side – where the St David’s multi-storey now stands – there will be further development soon as part of the Copr Bay Phase Two.

Record-breaking Swansea athlete Cyril Cupid is recognised in the name of the route from the bridge to the city centre – Cupid Way.

Swansea city centre is undergoing one of the largest urban transformations currently being delivered in the UK. £1bn is being invested in comprehensive projects across the city to allow Swansea to realise its potential as one of the UK’s most vibrant places to live, work, visit and study.

The council is working with development manager RivingtonHark on Copr Bay Phase One.

The bridge is part-funded by the Welsh Government’s Active Travel fund. 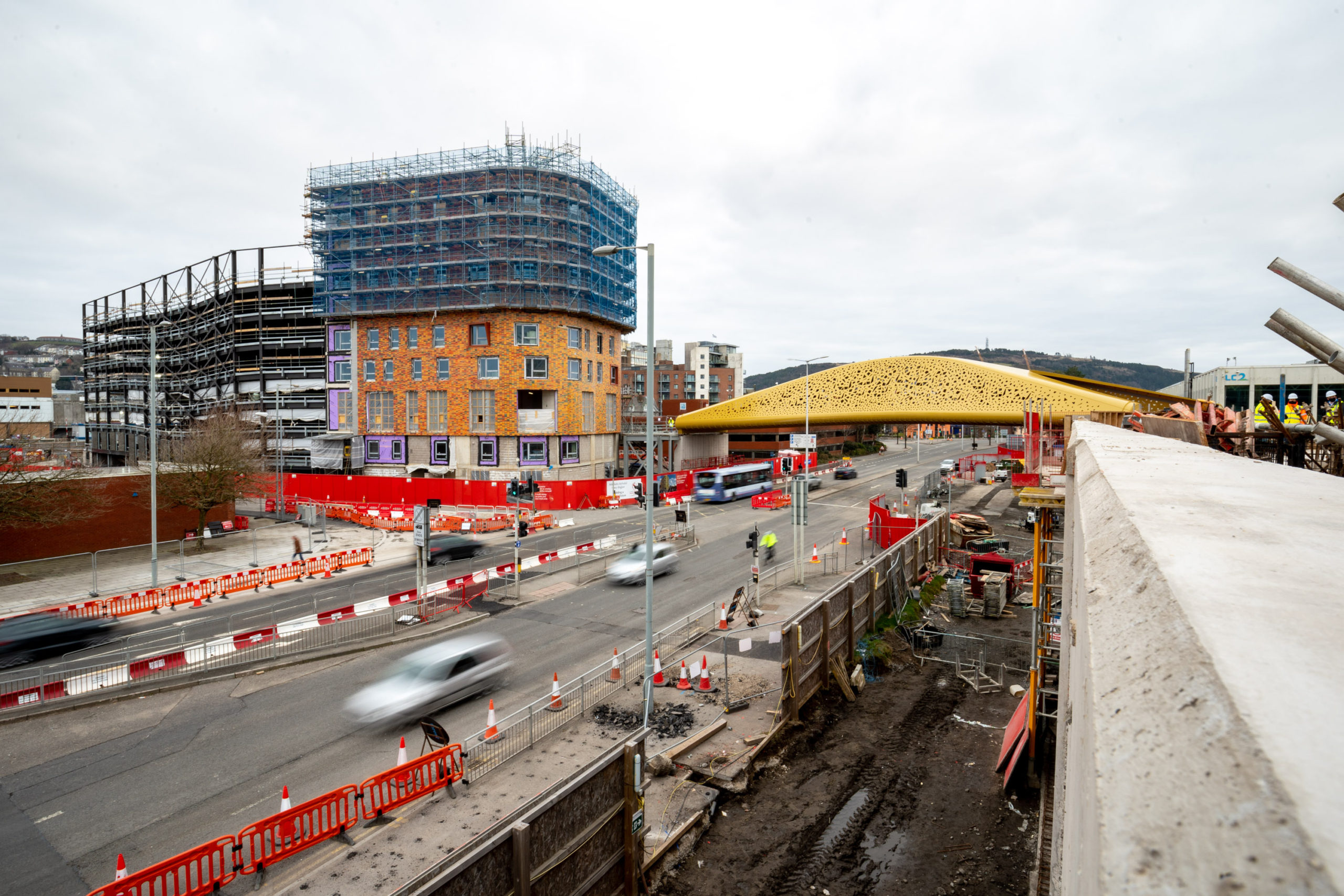