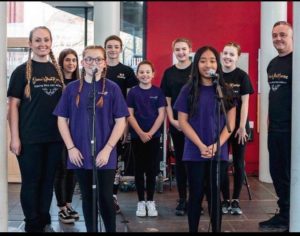 Less than a week ago Gower Gas & Oil Heating Services called out to the good people of Swansea to help drive and get funding for a project of creating a video to go with an anthem written to celebrate Swansea50. “This Is Our City” is written by Mike and Becca Mullan, from Dancerama, and will be sung by the remarkable talent that is Justine Afante who at 12 looks set for a superstar singing career. The plan was to get a professionally recorded video done to capture the City in all its colourful and embracing glory.

Julie Jones, Gower Gas & Oil – “We’ve worked with Mike & Rebecca on our “Don’t Dance Alone” campaign and really wanted to help drive the funding for their project and to tap into our contacts to bring as wide, diverse and all embracing group possible together for a video they plan to make to share our regions spectacular scenery, interests, culture and characters.”

Rebecca Mullan, song writer – “We want to create a video that truly reflect the workers, the talent and diversity that so enriches the beautiful tapestry of Swansea. The video will feature throughout the Swansea50 celebrations and show the cultural and spiritual diversity of our city, and feature heroes from all areas of Swansea life – icons of the community will star as will celebrities from the City and will be shown on the big screen in Swansea and performed at numerous events across the city and will truly reflect the workers, talent and community togetherness that so enriches the beautiful tapestry of Swansea !!!”

Organisations quickly rallied to help: dance troupes, musicians, Chinese, Jewish, Muslim, Anglican, catholic and Hindu communities, sports clubs and many more. Some funding support quickly came from Cllr Mo Sykes and Leader of Swansea Council Rob Stewart. They’re still looking for some funding and for people to be involved, including in the finale which takes place in central Swansea on Sunday June 23rd at 10 a.m. for an hour.

This is a true testament of what businesses, individuals and communities can do when they pull together. We can’t wait to see the finished product.

Well done to Julie, Gower Gas and Oil for making it happen. #keepingwaleswarm

It will be a lasting legacy for years to come.

If you’re interested in supporting or being involved you can find out more on their Facebook page – here or contact Michael Mullan on 07853 194788 or Rebecca Mullan on 07886 599470 or via Mikeandbecks@sky.com.