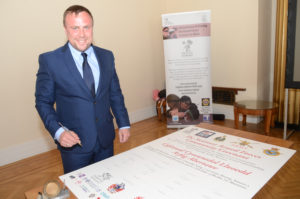 EFT Consult, a building services consultancy specialising in innovative technologies for the built environment, and the implementation of the principles of the circular economy, has signed the Armed Forces Community Covenant to show its support of the Services community in the Swansea region.

EFT Consult, based in Swansea, pledged its support to those who serve or have served in the Armed Forces and their families through signing the Armed Forces Community Covenant on 14 May at Swansea’s Guildhall. Its backing of the covenant, chaired by Swansea Council, seeks to encourage local communities to support the Service community in their area and nurture understanding and awareness amongst the public of the issues affecting the Armed Forces community.

The support of the Armed Forces Covenant complements EFT Consult’s dedication to the Well-being of Future Generations (Wales) Act 2015, which is a Welsh Government initiative focussed on improving the social, economic, environmental and cultural well-being of Wales.

The importance of the well-being of the Armed Forces community to EFT Consult is further demonstrated by the company recently agreeing to provide training to 100 veterans and service leavers, to help them to gain skills and work opportunities beyond the Armed Forces. The company has also employed former Services-personnel, recognising the wide variety of skills held by those who have served in the forces.

“I’m proud to be a part of a company that supports the Armed Forces community. The signing of the covenant solidifies EFT Consult’s dedication to this important part of our community and wider society. As an ex-serviceman myself, it is incredibly rewarding to be involved in an innovative and forward-thinking company that operates holistically to improve the well-being of Wales, while recognising and valuing those who have served our country.

“I have no doubt we will continue to build upon our work to help those who have left or are leaving the forces, as this is in line with EFT Consult’s ethos of improving social, economic, environmental and cultural well-being.”