Pioneering technology has been unveiled at a Swansea city centre regeneration project, allowing visitors to peer into the future. 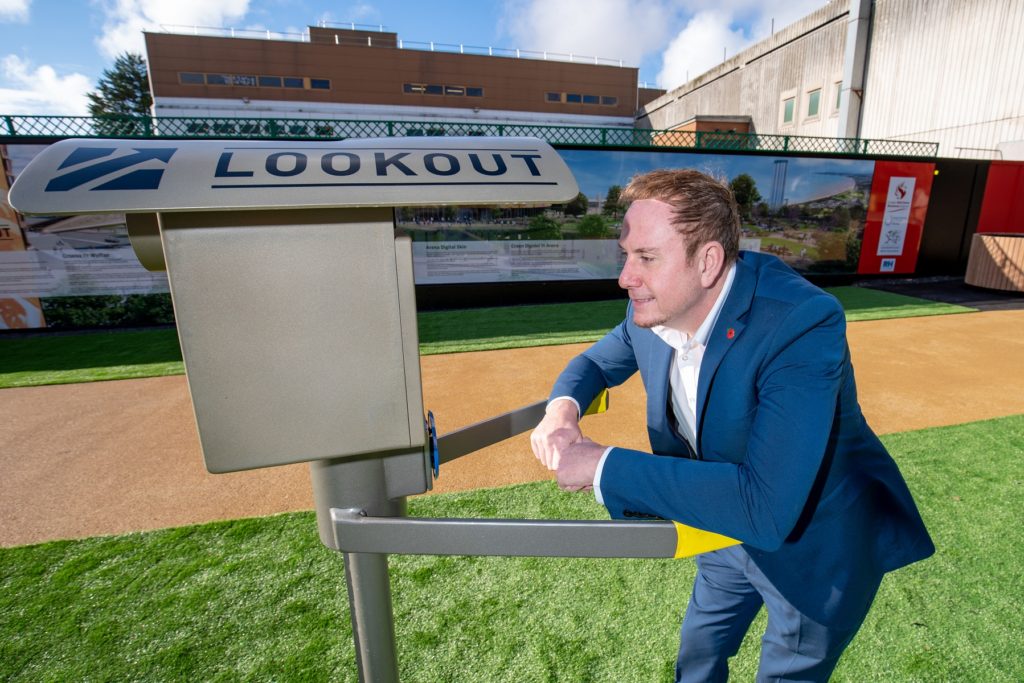 At the heart of the free attraction are ‘digital binoculars’, each with a viewing screen. They give local residents and visitors the opportunity to view interactive visuals that combine current images with how the city will look in a few years as the city centre-wide £1bn regeneration story develops.

As an added interactive element, viewers will have the opportunity to capture a picture of themselves and see their own image inserted into the Copr Bay district.

“This innovation is emphasised by Swansea University, a world-leader in championing digital technology.

“The partnership between the Copr Bay Phase One development and the University will give local residents and workers an innovative look at what our future city holds in store.

“The Lookout installation highlights how this city is fast becoming a best-in-class hub for design and digital innovation.”

It will bring together culture, entertainment and leisure, and links the city centre to the marina and the expansive sandy beach. Phase One is being delivered by Swansea Council working with development manager RivingtonHark.

Delivered by Swansea Council as part of its art strategy and managed by RivingtonHark, Lookout has been designed to offer opportunities for insight and reflection by visitors around the development, emphasising the history, current building works and future attractions, as well as highlighting innovation and talent in Swansea. 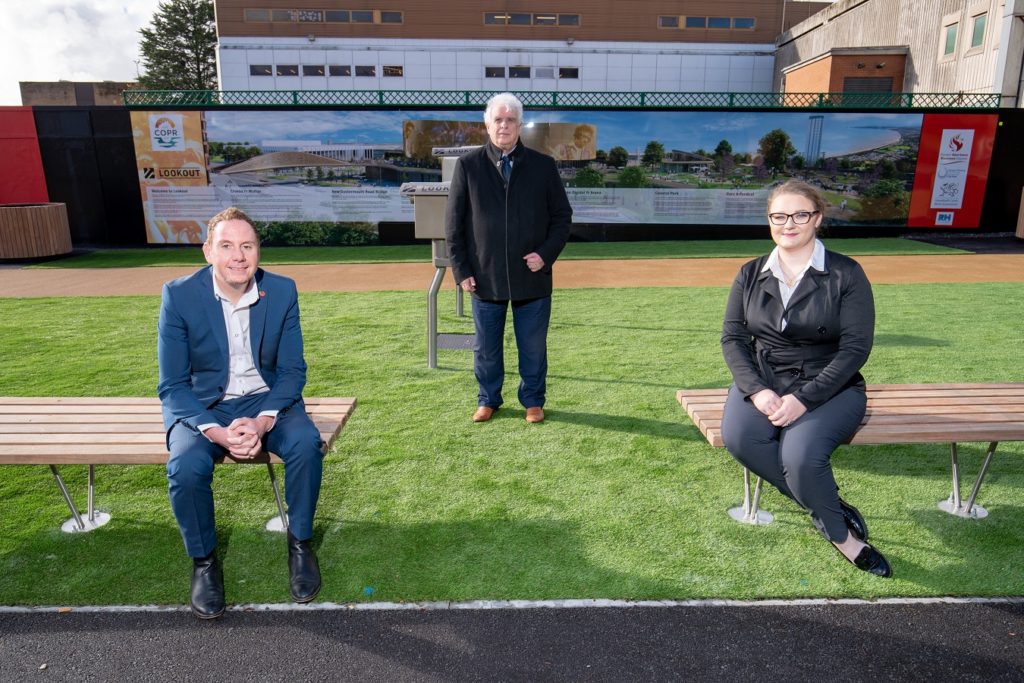 Lookout’s futuristic viewing devices are hands-free operated, making them Covid-safe and accessible to people of all abilities.

Two devices will be installed at different heights to be enjoyed by adults, wheelchair users and children. Tom Henderson of Swansea-based Henderson Engineering produced the digital binoculars from the RivingtonHark concept.

Professor Jones said: “Digital technology goes well beyond mobile phones and computers. Our research is all about putting people at the heart of innovation in the digital economy.

“The binoculars at Lookout combine current, archive and historical images with future perspectives, giving an engaging view of how Swansea will look in a few years.”

Located immediately to the south of St Mary’s Church, the binoculars at the Lookout feature content that can change throughout the duration of the construction with new visuals, information and interactive displays, ensuring local people and visitors can experience something new each time they visit.

Enhancing the immersive experience further, the Lookout installation will be surrounded by greenery, including new trees and seating, giving visitors a conceptual preview of what is to come with Copr Bay’s 1.1-acre coastal park.

Artificial grass has been installed at the Lookout for durability, whereas the future parkland will be a relaxing haven for biodiversity.

Completing the setting of the Lookout is an eye-catching graphic produced by Swansea-based creative media company iCreate which gives an insight as to how the development will look.

Anna Carter said: “I chose to study at Swansea University because it’s the only university that offers the opportunity to study technology with an intense focus on human interaction.

“This collaboration with Copr Bay Phase One felt like a natural partnership, since people and design innovation are central to the plans for the district.

“I hope the binoculars at Lookout will provide a really constructive visual aid to the exciting developments taking place within the city in an interactive and engaging way.”

The 3,500-capacity arena will be the first venue in the UK to feature an innovative lighting display – more than 70,000 LED lights that can create displays of dynamic artwork.

Other aspects of the scheme will include car parking, a landmark bridge, the coastal park, commercial units and apartments.

Copr Bay will bring new jobs and act as a catalyst for further investment in the city. The arena will be run by global entertainment operator ATG.

Copr Bay Phase Two will include additional homes, retail and offices, such as an office hub for public sector workers.

This includes new office space aimed at small businesses and start-ups, particularly as incubator space catering to the needs of students looking to grow their careers in the city after graduation.