A contractor has been appointed to build a major new high-tech office development that will provide space for 600 jobs in Swansea city centre. 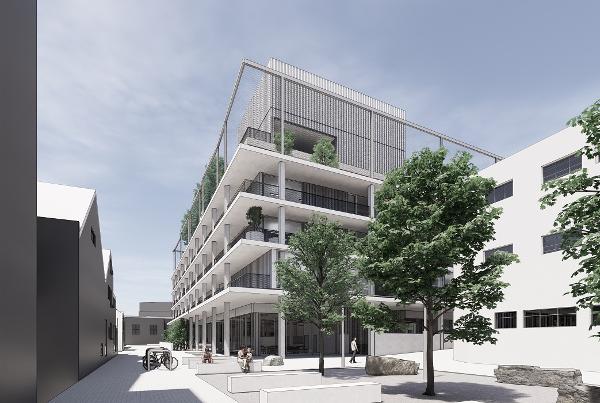 Bouygues UK will start work this summer on construction of the multi-million scheme at the 71/72 The Kingsway site where the former Oceana nightclub once stood.

Set for completion in early 2023, the five-storey development will include 114,000 square feet of commercial floorspace, providing flexible co-working and office opportunities for innovative tech, digital and creative businesses.

Once complete and in operation, the development will be carbon zero and worth £32.6 million a year to Swansea’s economy. It will feature state-of-the-art digital connectivity, a roof terrace, greenery and balconies overlooking the city centre and Swansea Bay.

Two underground levels will also be included. Public access is planned, as well as a new link between The Kingsway and Oxford Street.

Training and work placements for local people form part of the construction plans, as well as supply chain opportunities for local businesses.

Cllr Rob Stewart, Swansea Council Leader, said: “We’re delighted to appoint Bouygues UK as our main contractor for this key development, which forms part of an on-going £1 billion transformation of Swansea into the one of the UK’s best cities to live, work, study and visit.

“We know there is significant unmet demand in Swansea for world class office space of this kind and that some businesses have had to leave the city to find the accommodation they need.

“This major development will help tackle that issue by providing space for over 600 jobs in the tech and digital sectors, while also generating further footfall for our city centre traders and acting as a catalyst for even further private sector investment on The Kingsway.

“Despite a recent trend of more people working from home, interest in this development is still considerable. Positive discussions with a potential building operator and tenants are advanced, with a recent review showing the development’s design to be Covid-resilient.

“As part of the construction, we’ll ensure that local people and local businesses benefit from work, training and supply chain opportunities.”

Mike Baynham, Bouygues UK Operations Director for Wales, said: “Bouygues UK is delighted to be appointed as the contractor for this prestigious project which will transform this part of the city.

“The Kingsway has already seen a huge amount of improvements in recent years and this contemporary, flexible office development with opportunities for retail and leisure will further add to the regeneration of Swansea and the Swansea Bay City Region as a whole.”

The 71/72 Kingsway development is being funded by Swansea Council and the Swansea Bay City Deal.  It is also supported by the European Regional Development Fund through the Welsh Government.

Other developments in Swansea being part-funded by the Swansea Bay City Deal include the Swansea Arena forming part of the city’s emerging Copr Bay phase one district.