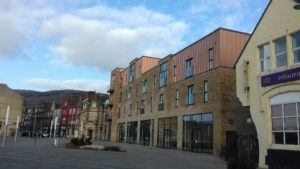 A £4m project to create a four storey apartment block with associated commercial space on the site of Port Talbot’s former town centre police station has been completed.

Residents are now moving in to the new Ty’r Orsaf development in Lower Station Road, Port Talbot, after it was handed over by building contractors Morganstone Ltd to housing group Pobl on January 25th.

The Police Station was demolished in August 2017 to create 30 apartments on top of 600 square metres of flexible commercial space (shops, offices, etc) on the ground floor to help create a new “integrated living” community in the town centre.

It is also close to the former Plaza cinema, due to become a community hub, Aberafan House, due to re-open as an apartment building after a £4.7m revamp, the former Glanafan School building, currently being turned into a £7m housing development and is near the entrance to Harbourside, the multi-million pound project to transform the town’s former docks quarter into an attractive new knowledge-focused waterside business centre.

Ty’r Orsaf (Station House) is one of the key projects in the Welsh Government’s Vibrant and Viable Places (VVP) Programme which ploughed more than £120m (between 2014-2017) into increasing the vitality and viability of a number of town centres across Wales including Port Talbot.

“Local businesses will also benefit as the scheme will involve an influx of people into a key site within the town centre and the wider community will be helped as the scheme will lead to creating an attractive public realm area at an important location.

“This new mixed use redevelopment will definitely add vitality to the town centre.”

The Welsh Government’s Deputy Minister for Housing and Local Government, Hannah Blythyn said: “We have provided £2.1m for this fantastic project because we are committed to providing more affordable housing in our towns as well as opportunities for employment and for people to work, shop and socialise. I Iook forward to seeing this development come to life with residents and businesses.”

Councillor Rob Jones, the Leader of Neath Port Talbot Council, added: “For me, the building holds fond memories of a long career as it is where I began my Police service in 1976 but now it has made way for a new development which will serve the needs of the town as it moves forward.

“This project is a vital part of our wider regeneration plans that will give the town centre a huge boost. The development is in the heart of Port Talbot town centre and is in close proximity to the Port Talbot Integrated Transport Hub and Harbourside.”