At 4theRegion we’ve been very excited about the construction of Copr Bay. Phase one of this £135m project has brought Swansea an amazing new arena (where we hosted its first major conference!), a stunning new bridge, the first new park in the city centre since Victorian times, new apartments, and spaces for food and drink businesses. 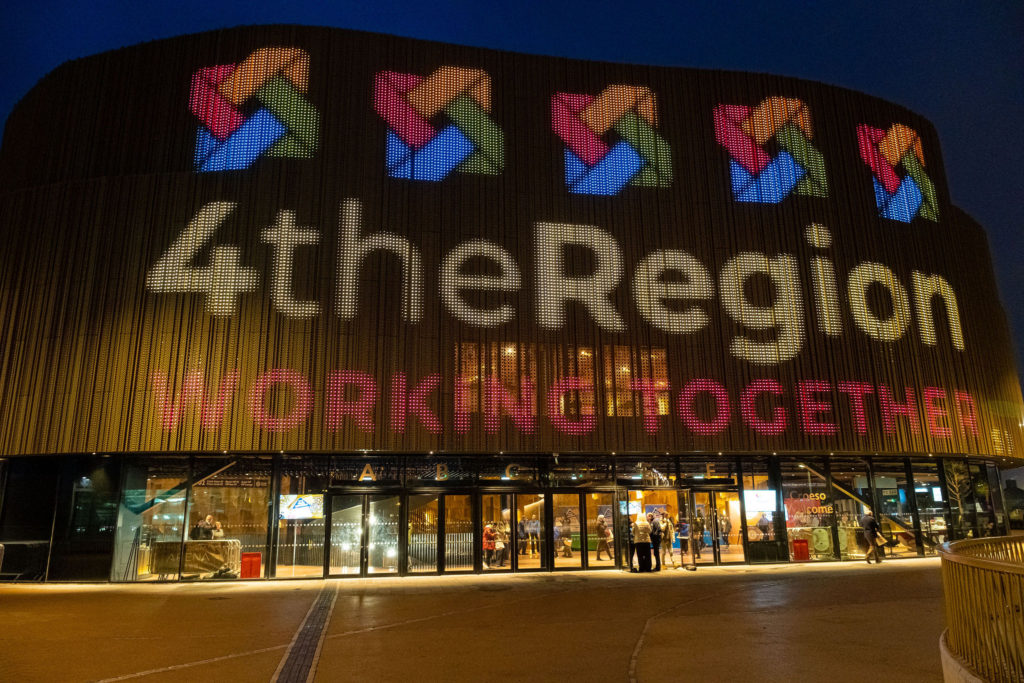 This has been a major boost for local workers and businesses. In fact, research has found the main growth driver for the Welsh construction sector is the £1bn worth of planned developments that will transform the centre of Swansea, which includes Copr Bay Phase One.

A report by Swansea Council and main contractor Buckingham Group found Copr Bay Phase One supported 8,000 person weeks of employment, apprenticeships and trainee placements. And it was good to see that 41.5% of supply chain spend stayed in the region, with 64% staying in Wales.

The development and construction sectors offer fantastic career opportunities, and we need to think about how we get more young people into the industry.

Why is that important?

A report by the Construction Industry Training Board has found, if Wales is to meet our projected growth prospects, we’ll need to recruit an extra 11,500 construction workers by 2026. If you, or someone you know, is interested in a career, the most in demand roles will be in bricklaying, the electrical trades, plumbing, heating, ventilation and air conditioning.

Regeneration is something we should all do together. So how do we ensure major projects are designed and delivered in a way that will provide long-term economic, social and environmental benefits for our region?

Some very exciting opportunities could come from the 20 year agreement Swansea Council recently confirmed with regeneration firm Urban Splash to transform the centre of Swansea with a series of £750m developments.

And last week, Urban Splash announced a joint venture with real estate developer Milligan to transform a 5.5 acre site in the area of St Mary’s Church. Early proposals include new office buildings, shared workspaces, apartments and an area for small creative businesses to make and sell their products.

Other ideas could include transforming the Civic Centre site into a mixed use destination, anchored by the beach, with new homes and a leisure and hospitality focus, and the residential led regeneration of a site in St Thomas featuring a new terraced walk providing direct access to the river for the first time in over 150 years.

And what other development projects could be coming to the region? We’ve taken a look at just a few of them.

Could a building feed us?

Bouygues UK have now started work on 71/72 Kingsway, which will include an urban farm style greenhouse set over four floors. Plants and vegetables will be grown in water and fed by waste pumped from fish tanks at the bottom of the building! This ‘living building’ will include green walls and green roofs, an educational facility, retail, offices, a landscaped courtyard, rooftop solar panels, battery storage and gardens. Set to accommodate 600 workers, 71/72 Kingsway will be made up of the former Woolworths and a new 13 storey structure. Pobl Group will manage 50 affordable apartments forming part of the scheme.

What about somewhere to spend quality time and relax?

Swansea’s Castle Square was once much greener than it is now, and is set to return to its former glory. There will be more plants, lawned areas and trees, as well two green roofed commercial units, and a water jet feature which can be switched on or off for different events at different times.

How can old buildings be put back into use?

Old theatres and cinemas, which are have lain empty for years, are being given new life as spaces for local businesses and communities. Swansea’s Albert Hall and Port Talbot’s iconic Plaza building will also once again be entertainment venues, while Swansea’s Palace Theatre will become a home for tech, start-up and creative businesses, with workspaces for over 130 people. 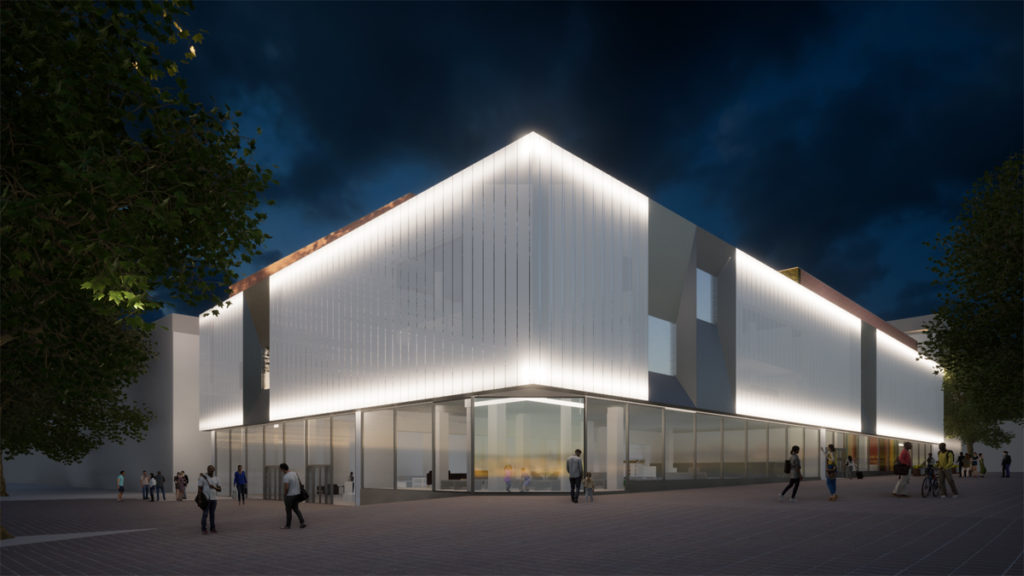 Oxford Street’s former BHS/What! building will become the new central location for Swansea’s main library and key council services, such as housing, benefits, employability, lifelong learning, and archives. Designers say the appearance of the structure, built in the 1950s, will have an impact appropriate to a public building, with translucent cladding backlit as a beacon to attract visitors.

It’s hoped Carmarthen’s former Debenhams will also be transformed into a hub to deliver a range of health, wellbeing, learning and cultural services. It could also become home for some of Carmarthenshire’s museum collections, an exhibition space, and a welcome point for visitors to the town.

How can a building generate its own power?

That’s happening with the Bay Technology Centre! The 25,000 square foot office and laboratory space in Baglan Energy Park uses innovative design and materials, including specialist photovoltaic panels made to look like cladding, to provide a sustainable building that’s energy positive. The design also means the ‘thermal mass’ of exposed precast floor slabs can store and transfer heat from the building, providing a cost effective heating solution. The plan is to convert excess energy into hydrogen at the Hydrogen Centre nearby.

The Blue Eden project will go even further than that! A 9.5km tidal lagoon will provide the energy for a manufacturing plant, a battery facility, a floating solar array, a data centre, residential waterfront homes for 5,000 people, and approximately 150 floating eco-homes in Swansea waterfront. Blue Eden will create over 2,500 permanent jobs, support a further 16,000 jobs across the UK, and create additional jobs during its construction.

The pandemic has changed the way people think about their living space, community areas, and the importance of work-life balance. So how could we be living differently?

St Modwen wants to expand the Coed Darcy neighbourhood in Llandarcy, Neath. The huge site, a former oil refinery, is set to be home to more than 1,800 new homes, a school and shops. It will be an ‘innovative and sustainable new 15 minute neighbourhood’, where everything that’s important would be within a 15 minute walk or bike ride.

What about our health and wellbeing?

The first phase of the £199m wellness and life science village in Llanelli has been given the go ahead. Based at Delta Lakes, this will feature a new leisure centre, hydrotherapy pool, clinical and research space, and education and business space. The project will eventually feature four zones, including assisted living accommodation and clinical recovery space, spread over 83 acres. The contract with Bouygues UK included ‘the highest level of community benefits ever prescribed’, including targets for sourcing through local suppliers. It’s hoped Pentre Awel will create just over 1,800 jobs when completed.

University of Wales Trinity Saint David’s £9.3m Innovation Matrix will be home to small but growing businesses. It’ll be a digital space, but with a manufacturing centre, testing laboratories and 3D printing facilities in UWSTD’s IQ building next door. The roof would feature solar panels, and the environmentally friendly building wouldn’t require any gas.

The Welsh Government’s flagship £200m Global Centre of Rail Excellence (GCRE) will create a hub for rolling stock and infrastructure testing, innovation, storage and maintenance at the site of the former Nant Helen opencast mine and Onllwyn coal washery at the head of the Dulais and Tawe Valleys, straddling the border between Neath Port Talbot and Powys.

It’s expected to create over 100 direct jobs, and could create many more as academic and industrial partners are attracted to the site. Featuring the UK’s first net zero railway, GCRE will include the first comprehensive rail testing and innovation facility of its kind in the world, with capacity and capabilities for rigorous testing of rolling stock, infrastructure, and integrated systems from prototype to implementation.

And what about tourism?

The Hafod-Morfa Copperworks were once the largest copperworks in the world. After lying derelict for years, work started to transform it into a new visitor attraction for Penderyn Whisky. Much of the new visitor centre is now up. The roof of the powerhouse, which will include an on-site distillery, is well advanced. And contractors John Weaver will recreate the powerhouse’s original clock tower. Plans also include a shop, tasting bar, exhibition space, offices and VIP bar in the fully refurbished grade two listed building.

Regeneration is something we should all do together. We need to ensure major projects are designed and delivered in a way that will provide long-term economic, social and environmental benefits for our region.

4theRegion are hosting our next Construction & Development Sector Forum on July 12th. Meet businesses and organisations from your sector to talk about opportunities to collaborate for the greater good in South West Wales. Hear from 4theRegion members and partners about their work in the region, their social purpose, and their ambitions for the future, emerging opportunities to collaborate and support each other across South West Wales! You can register your free place here.