Arena’s main construction work due to start in mid-2019 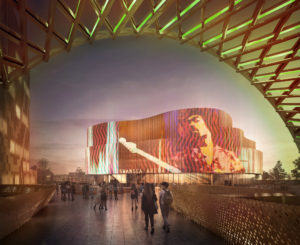 Main construction work on the major regeneration scheme – known as Swansea Central Phase One – is planned to start in the middle of next year.
The project is due to be complete by the end of 2020, with the state-of-the-art 3,500-capacity arena opening in the ensuing months.
Work on final detailed designs is under way, preparatory highway improvement work in the Wellington Street area is set re-start in the new year and world-leading venue operator Ambassador Theatre Group has agreed to manage the arena.
Early work on the main site will start in January and will allow the main construction work to start on time in the middle of the year.
The updates come in a report going to Swansea Council’s cabinet next week.
Council leader Rob Stewart said: “This development – which is a once-in-a-generation opportunity to boost our local economy by over £70m a year – is progressing as planned.
“Swansea Central Phase One will help transform the city and create a superb attraction and destination for concerts, tours, conferences and events.
“It is set to create around 500 jobs and help drive growth and demand for restaurants, shops, hotels and taxis; this will bring money into the economy and visitors to our beautiful city.
“We will need to borrow some money to support this transformational scheme. However, borrowing is at historically low levels and we will carefully phase it – including sums being prudently set aside in reserves to fund future capital expenditure – so as not to place any overall extra pressure on council revenue finances during the life of this council.
“Over time we hope this development will produce extra income for the council which outstrips any repayment.
“Significant consultation has been undertaken with the public who are overwhelmingly in support of the scheme – with 86% approval figures. Planning permission is in place and funding from the City Deal and other sources is now nearly all in place.”
Swansea Central Phase One will include the arena, with digital facade, a digital square, car parking, coastal parkland, commercial units, residential units and a broad pedestrian bridge across Oystermouth Road.
The scheme will deliver 944 new car parking spaces on site across the two new multi-story car parks plus 300 extra park and ride spaces at Fabian Way.
The new parkland will encourage city centre living and generate closer ties between city and sea.
The development will increase Swansea’s number of trees with at least 250 remaining or being planted afresh on this site.
Cllr Stewart said: “We simply have to do this or we will continue to fall behind other cities.
“People are fed up of waiting for Swansea’s turn, and we are fully committed to delivering a transformed city which is prosperous and successful.
“This scheme will increase the number of people in the city centre, create a major new leisure destination, deliver new conference facilities and bring exciting new public spaces. The coastal park will be the first new park in Swansea in over 70 years; it will become a popular space for families and visitors.
“The whole scheme will drive up Swansea’s ambition, connect the city digitally, create jobs and increase wealth. It will act as a catalyst for future city-wide development and stimulate private sector investment here.”
The arena is also one element of the Swansea City and Waterfront Digital District project due to be part-funded by the £1.3bn Swansea Bay City Deal. The City Deal is an investment in 11 major projects across South West Wales being funded by the UK Government, the Welsh Government, the public sector and the private sector. Other features of the Swansea project include a digital village for tech businesses on Kingsway, and a ‘box village’ development for start-up companies at the University of Wales Trinity Saint David in SA1.
Swansea Council