Deep in the former coal valleys of South Wales, forged by the finest young minds in the country, a powerful new creature is emerging: Dipsy, the Eco-Cat! She is now on her way to COP26, furious with the lack of progress in the first week to tackling climate change. Dipsy is carrying a sackful of messages from Welsh school children. 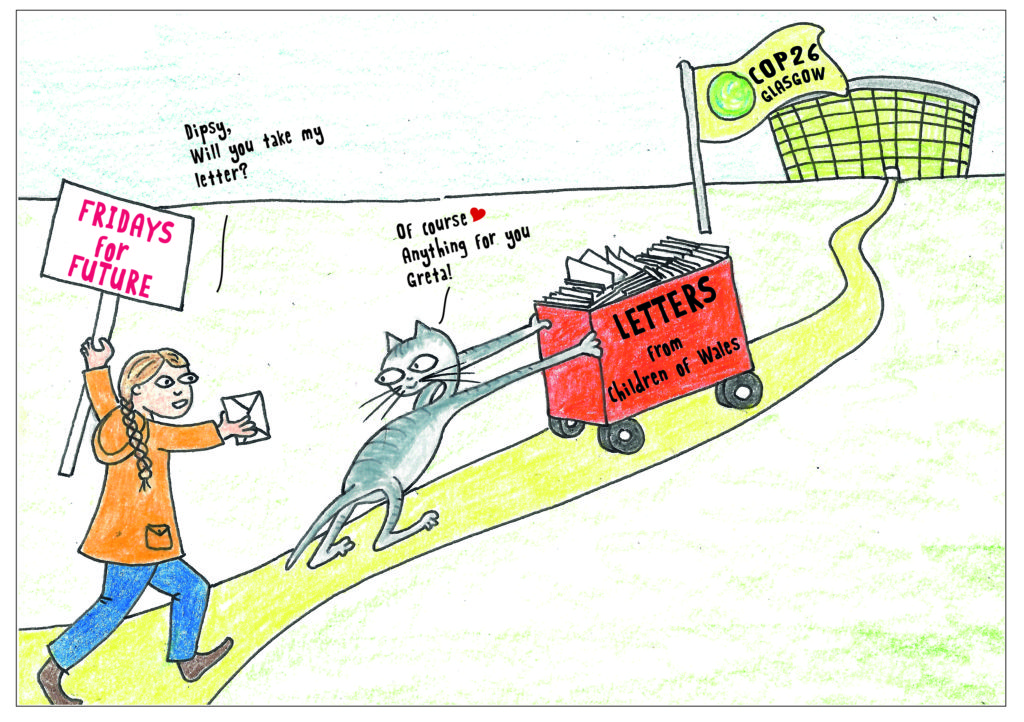 How did this happen? Emily Hinshelwood, co-founder of Awel Aman Tawe, explains “I was on a zoom call with 300 children in Pembrokeshire, talking about how we managed to build our community wind farm after nearly a 20-year struggle. Dipsy, climbed on my shoulders during the zoom call and the children loved her. They asked questions about wind turbines and climate change – so I started to draw cartoons showing how Dipsy is finding out the answers. Jen James, Education Officer for Awel Aman Tawe, said “The children in the Pembrokeshire Schools – Y Frenni, Saundersfoot, Bro Ingli and Gelli Aur really like the cartoons, and have also been drawing Dipsy themselves as part of our Energy Warriors project – this is a music, science and art project being delivered in partnership with EnergySparks, Ynni Da, Sion Tomos Owen. Mr Phormula and TTS Practical Science. We’ve also been working with Caerleon Comprehensive in Newport who’ve been similarly inspired by Dipsy. 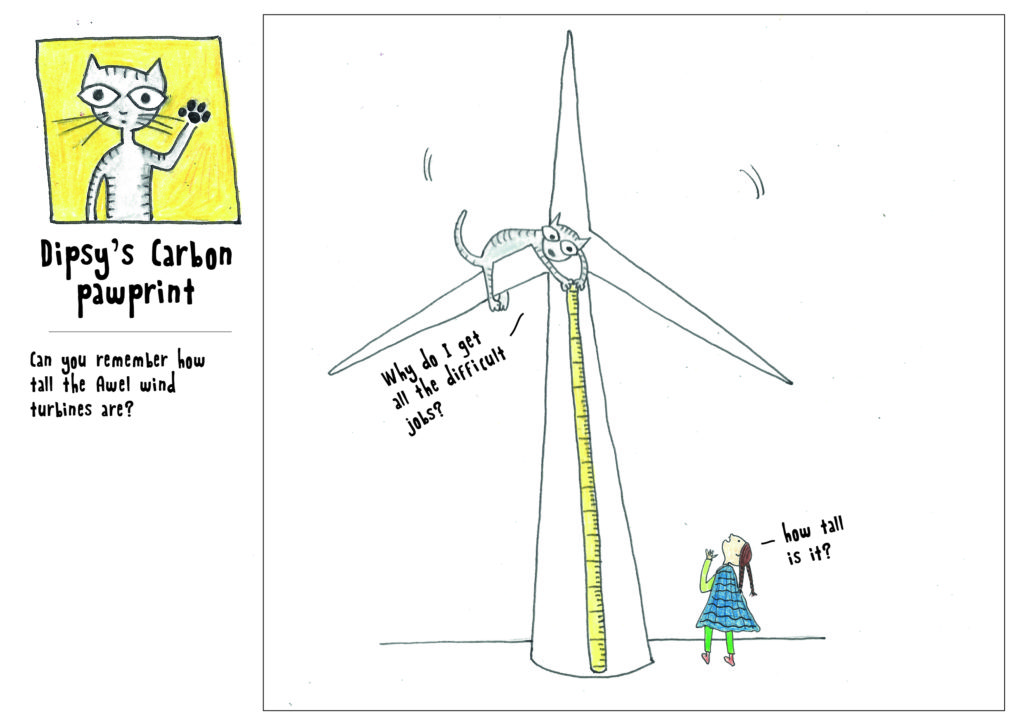 Emily added “Wales has a long tradition of powerful cats dating from Cath Palug on Ynys Môn first mentioned in the 13th century. Palug challenged leaders – I loved that story and illustrated Jackie Morris’ beautiful words. Luckily, the messages that Dipsy is taking to COP are already being picked by our climate change policy leaders – Julie James, Welsh Government’s Minister for Climate Change and Poppy Stowell-Evans, Chair of the Youth Climate Ambassadors for Wales have both retweeted Dipsy. But other leaders at COP should bear in mind the legend of Cath Palug if they don’t act responsibly!” 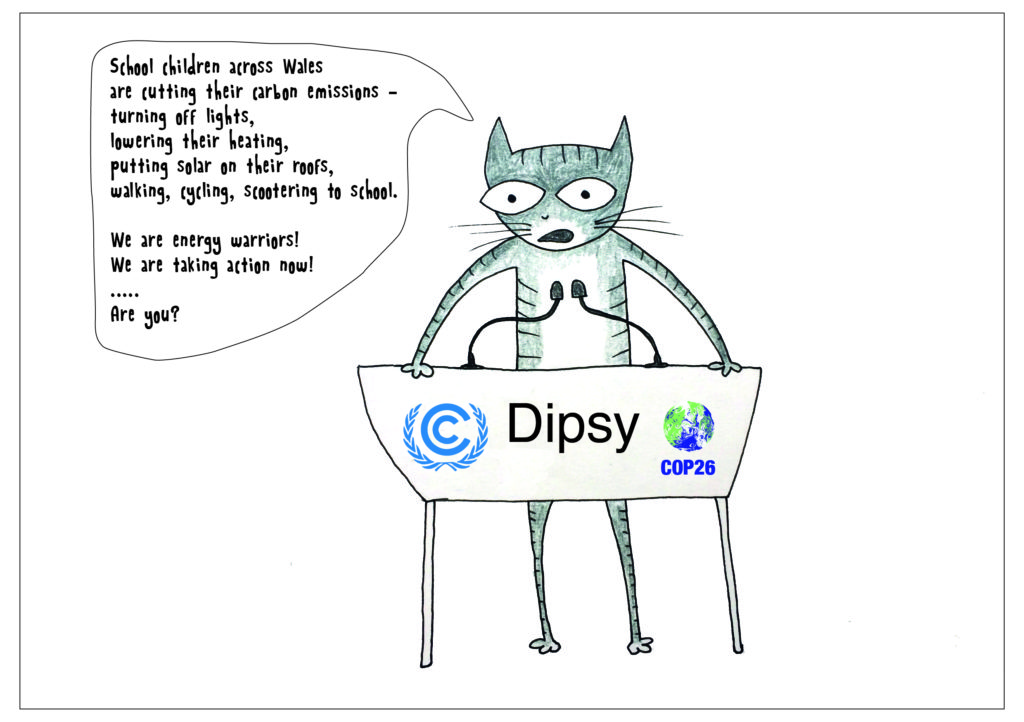 The pressure is on for the politicians to deliver real commitments. Energy Warriors in Welsh schools have already worked with Egni Co-op to install solar panels and are now making further cuts to emissions in schools. Dipsy, with messages from Welsh Energy Warriors, will be on the shoulders of the leaders at COP this week….. 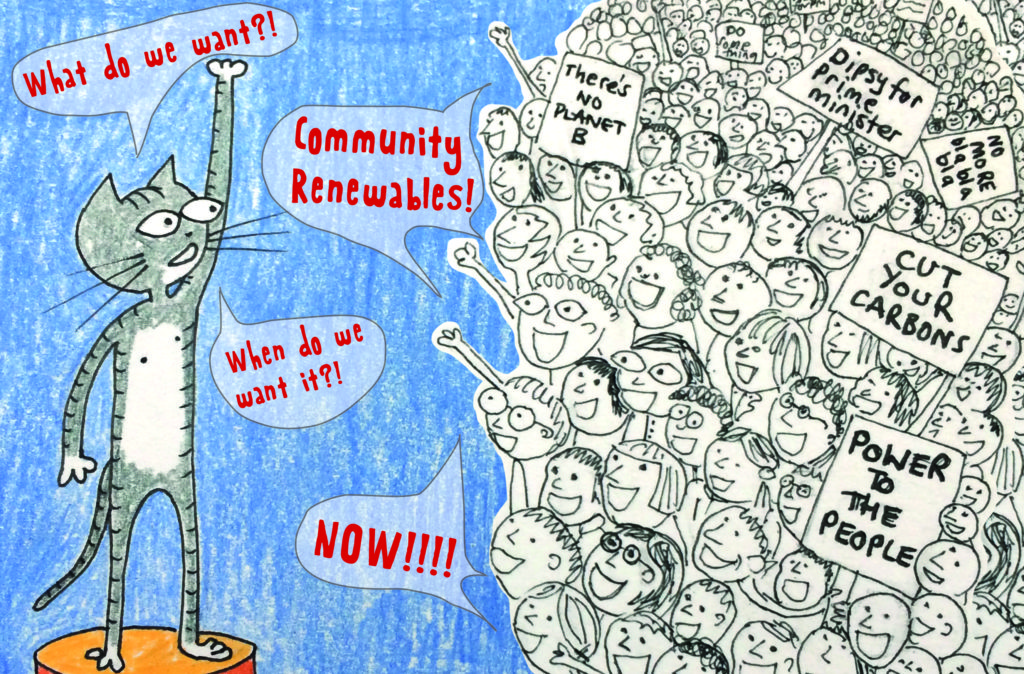 Egni has installed 4.3 MWp of rooftop solar on 88 schools, community buildings and businesses across Wales. It’s now the largest rooftop solar co-op in the UK. www.egni.coop

All the sites are backed by the Feed in Tariff. Egni is refinancing our loan from the Development Bank of Wales with co-op shares as this is at 6% interest whereas co-op members invest at 4% interest. This means that there is more surplus going into climate change education projects in Welsh schools.

Here are recent films made by double BAFTA Cymru winner, Mike Harrison about the largest rooftop solar project in Wales on the Geraint Thomas National Velodrome in Newport and at Merthyr Town Football Club: