If you’re walking through Castle Square today you’ll pass between the Big Screen that delivers 21st century advertising and entertainment, and the building remains that offer multiple links to our cultural past.

Did you know that a century ago, the interior of Swansea Castle was used as a newspaper office? For a time in the early 1930s a teenaged Dylan Thomas could be found there working as a junior reporter on the South Wales Daily Post. If Dylan’s association with the local newspaper was brief, his association with a nearby café was far more lasting. The original Kardomah Café, established in 1905, was based in Castle Street. It became a favourite meeting place of local creative artists. Sadly the café didn’t survive the bombing of World War Two, but its legacy is alive and well.  The new Kardomah Restaurant can be found in Portland Street.

In 1949 the BBC’s Swansea and the Arts radio programme focused on the city’s cultural riches. Speaking for Swansea were Dylan Thomas, poet Vernon Watkins, composer Daniel Jones, writer John Pritchard and artist Alfred Janes. The five men were captured in a Radio Times photograph used to publicise the broadcast, and decades later another Swansea artist helped to keep the memory of the broadcast fresh with his own interpretation. 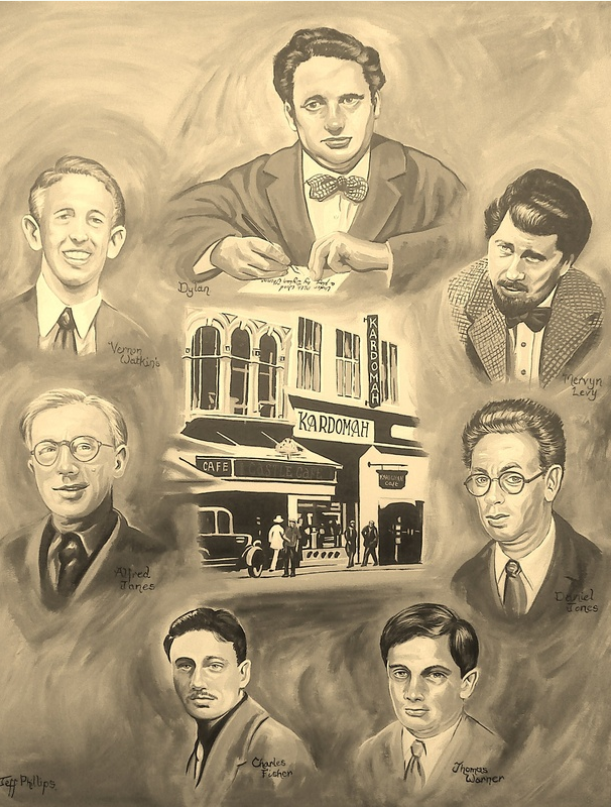 Jeff Phillips has made countless contributions to the arts in Swansea, and his acrylic painting of the Kardomah Gang is among the most memorable. The painting captures a moment in time, with Swansea rising from the ashes of World War Two and looking forward to the second half of the twentieth century. It’s part of our history.

And what about our future?

This month, Swansea Creative Focus is launching a new creative hub at our centre in High Street Station. It will be inclusive. It will showcase the best of the city’s artistic talent. It will bring together a new Kardomah Gang for the 2020s.

Who would you like to see represented in this new creative group? They might be painting, sculpting, podcasting or writing. Whatever they’re doing, we want to hear their voices. To find out more about how Swansea Creative Focus is bringing local talent together, contact us at 4theRegion.

This is part of our Creative Focus Advent Calendar.  See the rest of the series here.